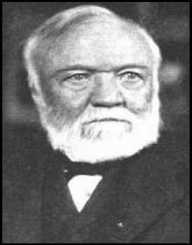 Andrew Carnegie was born on November 25, 1935, in Dunfermline, Scotland. He was born in a typical Scottish cottage, consisting only of one room. Carnegie was profoundly influenced by his uncle, who introduced him to writings of Robert Burns and many historical Scottish heroes. His uncle's son George Lauder later became Carnegie's business partner.

The family lived in unfortunate circumstances, and by 1840s, his mother was the sole breadwinner in the family. In 1848, the family decided to move to the United States to find a better life.

The family borrowed some money and migrated to Allegheny, Pennsylvania. There Andrew Carnegie got his first job as a bobbin boy, changing spools of thread in a cotton mill. He worked for 12 hours a day. His father also worked in a cotton mill, but his mother earned money by binding shoes.

In 1850, Andrew Carnegie started working as a telegraph messenger in Pittsburg Office of the Ohio Telegraph Company. He was a hard worker and had memorized all the names, addresses, and faces of his clients. After a year, he was promoted to an operator. Carnegie was also allowed to use the extensive library of Colonel James Anderson and educated himself on various topics.

The Pennsylvania Railroad company employed Carnegie in 1853. He worked as secretary/telegraph operator and saw many prospects in railroad field of work. He rapidly advanced through the company and became the superintendent of the Pittsburg Division. Railroads later became the first big business of Carnegie in America.

Andrew Carnegie borrowed his first $500 to invest it in the Adams Express, which contracted with Pennsylvania. He kept reinvesting his earning, mostly based on inside information in railroad-related industries- iron, bridges, and rails.

Before the Civil War broke out, Andrew Carnegie had merged with a company that invented the sleeping car for first-class travel. This facilitated business travel for distances longer than 500 miles and proved a great success.

In 1861, Carnegie was appointed as the Superintendent of the Military Railways and the Union Government’s telegraph lines in the East. Carnegie’s company built the rail lines to Washington D.C., where they were destroyed.

Andrew Carnegie also personally supervised transportation of defeated forces. He also organized the telegraph service, which was of great significance to ensure Union’s victory. Civil war turned out to be very profitable for Carnegie since there was a high demand for munition, railroads and telegraph lines.

In 1864, Andrew Carnegie invested in Story Farm on Oil Creek in Pennsylvania. After a year, the farm had earned $1,000,000 in cash dividends from petroleum in oil wells. The demand for iron products became high; it made Pittsburg the center of Wartime production.

After the war ended, Carnegie devoted his efforts towards ironworks and left the railroads. He formed the Keystone Bridge Works and the Union Ironworks. The contacts he made in the railroad industry later helped him to acquire contracts with his new company.

Andrew Carnegie was often present in many social functions and made a lot of connections. He also believed in using his fortune for the good of others. Thanks to the new inventions in steel production, Carnegie soon owned a fortune. By 1889, Carnegie owned a large part of steel production in the country, which exceeded that of UK.

When Carnegie was 61 years old, he started to consider retirement. In 1901, he formed his enterprises in conventional joint-stock corporations. Later in the year, Carnegie led negotiations with a banker John Pierpont Morgan, and the United States Steel Corporation was formed. The company became first in the world with $1 billion market capitalization.

Andrew Carnegie made enormous profits, but he firmly believed in giving back to the community. He constructed swimming-baths for the people in his hometown and later made substantial donations for building Dunfermline library and Bellevue Hospital Medical College to found a biology laboratory, now called the Carnegie Laboratory.

His mother laid the foundation stone of Carnegie Library. In 1886, Carnegie wrote his most radical work the Triumphant Democracy, which viewed America’s governmental system superior to British monarchical system. The book was sold in large amounts in the U.S. and made Americans appreciate the economic progress of their country.

After his retirement, Andrew Carnegie drew attention away from his wealth to his public spirit. He purchased a home in New York, which is now the Cooper-Hewitt National Design Museum. Carnegie was also a supporter of the spelling reform to promote the spread of English language. He started the organization Simplified Spelling Board and created a book written wholly in reformed spelling.

Carnegie established public libraries in U.S., Canada, Britain and other English-speaking countries. With his support over the years, around 3000 libraries were opened. Carnegie also was investing in education. He gave $2 million to start the Carnegie Institute of Technology at Pittsburg and the following year; he gave the same amount to fount the CIT at Washington D.C.

In 1911, Andrew Carnegie donated $10 million to the Carnegie Institution to help build the Hooker Telescope at Mount Wilson. Carnegie was very fond of music, which led him to fund the construction of 7,000 church organs. He also built the Carnegie Hall in New York City.

Andrew Carnegie was very close to his mother and didn’t want to marry during her lifetime. He took care of her, mainly when she was ill towards the end of her life. After his mother’s death, Carnegie married Louise Whitfield. He was at the time 51 years old, but she was only 30. The couple had one child-daughter Margaret.

Carnegie died on August 11, 1919, at his Shadow Brook estate. He suffered from bronchial pneumonia. By the time of his death, Carnegie had donated $350,695,653 (now around $76,9 billion) to various causes. After his death, his last $30,000,000 were given to various foundations and charities. Carnegie was buried at the Sleepy Hollow Cemetery in North Tarrytown, New York.