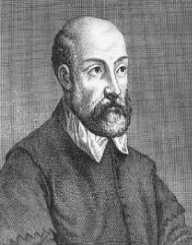 Andrea Palladio was given the name Andrea di Pietro della Gondola and was born on November 30, 1508, in the city of Padua, Republic of Venice. At the age of thirteen, he became an apprentice in the workshop of stonecutter Bartolomeo Cavazza da Sossano.

Three years later, he moved to the city of Vincenza. There, he joined the Pedemuro studio and worked as a stonemason. In 1538, he worked in the villa of humanist Gian Giorgio Trissino. Trissino noticed his talent and started to educate him about architecture. He gave him the name Palladio, inspired by Pallas Athene, the Greek goddess of wisdom.

Andrea di Pietro traveled to Rome and Venice to study classical architecture. He developed his style, called the Palladian style. His work was mostly inspired by Ancient Roman architecture. He also sometimes incorporated elements from the Early Renaissance. He was sponsored by many affluent families, such as the Barbaros, the Pisani, the Foscari, and others.

He designed dozens of villas, such as Villa Barbaro, Villa Angarano, and Villa La Rotonda. He worked on many palaces, including Palazzo del Capitaniato, Palazzo Antonini, and Palazzo Thiene Bonin Longare. He designed several churches, such as the Church of San Giorgi Maggiore, the Basilica of San Antonio, and the Church of Santa Maria Nova.

Andrea di Pietro also created several theatres and bridges, as well as a town hall and an arch. In 1570, he published four volumes of books about architecture. In the books, he talked about architectural material, techniques, designs, and city planning. He added his illustrations to the books.

Andrea di Pietro passed away on August 19, 1580, near the city of Treviso. He was 71 years old. His body was buried in the Santa Corona church in Vicenza. In the 19th century, his remains were relocated to the Maggiore cemetery in Vicenza.

Palladio’s work inspired architects such as Christopher Wren, Giacomo Leoni, Inigo Jones, Elizabeth Wilbraham, William Kent, Richard Boyle, and others. Many of his sketches are on display at the Royal Institute of British Architects. In 1979, The Centre for Palladian Studies in America was founded in Charlottesville, Virginia. It is a non-profit organization which studies Palladio’s influence in American architecture. In 1994, UNESCO added 24 of his buildings to the World Heritage List. In 2010, the Washington D. C. National Building Museum hosted the exhibition Palladio and His Legacy: A Transatlantic Journey.