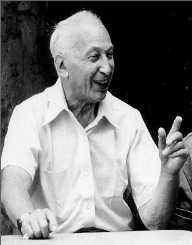 André Kertész was born on July 2, 1894. He is remembered for his photography and journalism. He died on 28 September 1985. He is among the founding fathers of photojournalism and contribution in the photo essay. Andre had unorthodox camera angles which, when combined with the style he used to lead to a low recognition. He worked on commissions until he became known internationally. His career is four-phased: Hungarian period, French period, the American period, and International Period. He died on 28 September 1985.

André Kertész was born on 2 July 1894 in Budapest, Hungary. His father, Lipot Kertesz worked as a bookseller and his mother, Ernesztin Hoffman was a homemaker. He was blessed with two siblings.

Lipot died of tuberculosis in 1908, and Ernestine's brother took them in since she had no earnings. Growing up in his uncle’s home was leisurely, and it built up his interest. Even though he was given a job for the stock exchange, he had no interest in it but wanted artistic works.

In 1912, André Kertész had saved enough money from the stock exchange market that he was able to purchase an ICA box camera. In the same year, he continued to work as a clerk for the Budapest Stock Exchange while taking photographs, but his family never advocated for this shift in interest. In 1912, it was believed that Andre’s debut photo was titled Sleeping Boy. His unorthodox photography came to light in 1914.

By 1917, André Kertész had captured many moments that his photos were published in Érdekes Újság, a magazine in 1925. In 1919, many of his pictures were destroyed in the Hungarian Revolution. In 1917, his most appraised work, Underwater Swimmer, Esztergom, was captured. In 1918, Andre went back to the stock exchange and left it in the 20s to pursue agriculture.

In 1925 after moving to Paris, André went to take up a commissioned job from European magazines. This helped his work to reach all European nations. In 1936, he took a project with Keystone Studios in New York City. From 1939 to 1949, André freelanced for many American magazines like Vogue. He retired in 1962 from commercial photography.

André Kertész had a solo exhibition at the Art Institute of Chicago in 1946. He later set up some of his best works in his Washington Square Park apartment in 1952. He stayed there for a long time before launching an exhibit at Long Island University in 1962.

André Kertész received the Guggenheim Fellowship in 1974. In the same year, he also received the Ordre des Arts et des Lettres from the army. In 1977, Andre got a Mayor's Award of Honor for Arts and Culture in New York. He was presented with Annual Award of the Association of International Photography Art Dealers in 1980. In 1981, he also received an honorary Doctorate of Fine Arts.

In 1933, André Kertész married Erzsebet Salomon, who changed to Elizabeth Saly until she was decreased in 1977. In 1984, he won the Maine Photographic Workshop's first Annual Lifetime Achievement Award. He also received the Californian Distinguished Career in Photography Award in 1985. The Metropolitan Museum of Art made the most significant purchase from a living artist consisting of 100 prints by André. André died on September 28, 1985.