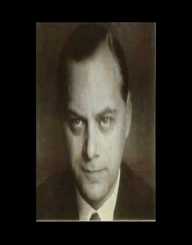 Alfred Rosenberg was raised in Russia as a member of a wealthy and influential family of Baltic German extraction. His birthdate was 12th January 1893. In his teenage years, he showed an academic prowess that was noticeable and evident. Alfred proceeded to study Engineering and Architecture as a major while yet in Moscow. He bagged his doctorate in the year 1917. The dawn of the Russian Revolution altered the state of the Russian society such that his family had to migrate to Germany in the year 1918.

Alfred Rosenberg was on the wrong end of experiences during the Russian upheaval, and this led to his deep hatred for communism. He was repulsed by anything that had to do with the communist society. Part of the takeaways he surmised from the experiences was that the Jews were supportive of the revolution. He also became anti-Semitic as a result of these views.

After the end of WW1, the German capital of Munich became the center of the raging views of the anti-Judaism movement, and this was also allied as anti-communist. Rosenberg became a member of the GWP (German Workers Party) in 1919 while Hitler joined its fold in less than a year. The National Socialist German Workers Party evolved from the GWP. When the party’s newspaper was launched, Alfred Rosenberg signed on as a member of the pioneer team of editors. The press was the platform for the theories and beliefs of this otherwise brilliant mind to be ventilated.

In no time, the publication was notoriously anti-Semitic, and Rosenberg became the party’s leader in the short-term. This was when Hitler was imprisoned following the failed attempt of the Nazis to take over the reins of government violently. While Rosenberg was noted for brilliance, his leadership skills were criticized by Hitler who looked forward to reclaiming the party leadership after his release.

When Hitler regained his freedom, Rosenberg ceded leadership of the party to him. Rosenberg after that immersed himself in marshaling the beliefs of the party. He addressed the Jewish Question exhaustively although in a prejudiced manner. Alfred worked after that on a book titled “The Myth of the Twentieth Century.” This became a bestseller and brought substantial financial returns to Rosenberg.

The writings of Alfred Rosenberg have been ascertained to have influenced the views of the Nazis and this included. A slew of propaganda that the party treated as a near-holy writ was the result of Rosenberg’s thoughts and writings. Many Nazis who had no clue of communism and Judaism got fed acerbic content that led to the holocaust and WW2.
By the time it was needed for the theory of a superior Aryan race to be proven, Rosenberg took on the mantle to get this done. This aligned with Hitler’s racial theories at the very basic instance. The goal was to show that the Germans were the undoubted superior race.

The prejudiced classification put Jews, and the black race at the bottom of the ladder of the human race with the Poles and Czechs rated as worthless. This racial thinking was a misnomer that had no place in rational thought. The extremities of Rosenberg’s blighted ideology included the preservation of the German blood and a refusal to dilute it through inter-marriage. He claimed diluted blood weakened the German characteristics. Rosenberg's thoughts on several of these subjects were the basis of Nazi thinking which crystallized when WW2 began.

Alfred Rosenberg's theories served to unify German paradigms just as the Nazis laid the groundwork for the war machine that was being built at the time. Also, this was also a necessary result for the impending power grab they envisaged. Rosenberg’s imprints could be seen on every facet of the programs put forward by the Nationalist Party. The 1922 work, “Nature, Basic Principles, and Aims of the NSDAP” espoused this entire ethos. Although the thesis was short, it, however, became the basis for forging the party’s resultant programs. Beyond this, the manner of interpretation of what the party stood for was traceable to the primary work of Rosenberg.

As the Reich was galvanized on a cumulative basis, the aims and programs laid out for the party by Rosenberg were extensive. The connection made throughout the local groups, and the center at Munich was grounded on Rosenberg’s writings.

The WW2 became both the Eureka and Nunc Dimittis for Rosenberg. This revolving door was such that saw to his emergence as head of the “Ministry for the Eastern Territories” occupied by the Nazis. He led the Wannsee Conference to discuss how the Nazis would seize the world. It included how the Holocaust will be prosecuted, and it provided the basis for some of the crimes against humanity for which Rosenberg was tried at Nuremberg. The capture of Rosenberg after the fall of Nazi Germany led to his arraignment at Nuremberg. His arrest was along with other leading lights of the Nazi regime. In his prison writings, he still held on to the ethos that National Socialism was the height of German patriotism.

Alfred Rosenberg's final sentence after he was tried was to end up on the hangman’s noose, and he was hanged on 16th October in 1946. His crimes against humanity were unpardonable, and he paid with for them with his life.

Alfred Rosenberg was twice married. Firstly, he wedded  Hilda Leesmann before the second one to Hedwig Kramer. He had two children in his lifetime.