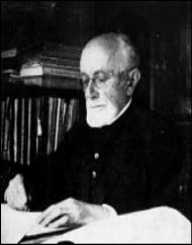 Theologian, professor, and Catholic priest Alfred Loisy was born on the 28 February 1857 on a farm in Ambrières, France.

Alfred Loisy was a pupil at the College de St Dizier during his high school years. In 1874, at the age of seventeen, he began studying at the Diocesan Seminary at Chalons-sur-Marne. In 1878 he continued his studies under Abbe Duchesne at the Institut Catholique in Paris and was ordained as a Catholic priest in 1879.

After working as a parish priest in rural France for two years, Alfred Loisy became a member of the faculty of theology at the Institut Catholique where he lectured in Hebrew. During this time he passed a thesis which went against traditional beliefs, and this was the cause of some consternation as it led to the possibility of a critical study of the Bible. The controversy prompted Loisy to begin advocating for the modernization of the Catholic Church’s traditional interpretation of the Bible. Loisy was dismissed from his position at the Institut Catholique in 1893 and transferred to a school in Neuilly to work as a chaplain.

By 1900 Alfred Loisy was lecturing at the Ecole des Hautes Etudes at the Sorbonne.

Loisy continued reading, writing and researching and in 1902 he wrote The Gospel and the Church in which he attempted to reconcile modern thought and Catholicism. The Church saw it as heresy and excommunicated him.

The modernism movement within the Catholic Church which began in the late 1890s officially ended in 1907 with Pope Pius X’s Papal encyclical Pascendi gregis.

Alfred Loisy was Chair of History of Religions at the College de France between 1909 and 1931. He remained committed to his philosophy until he died on the 1 June 1940 aged eighty-three.