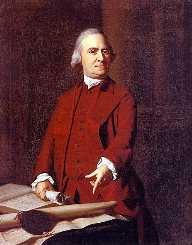 Abraham Whipple was born on September 26, 1733. He was a revolutionary commander in the continental navy. He is famous for his achievement of destroying the British Ship ‘HMS Gaspee’.

Abraham Whipple was born on September 26, 1733, in Rhode Island. He was born to Noah Whipple Junior and his wife.

Abraham Whipple was appointed the captain of a merchantman where he learnt navigation and sailing. He also made friends with the group ‘Northern Harbours’ which assisted greatly in the American revolution. In 1772, he gathered a team of about fifty men whom he led to Rhode Island to burn the British ship ‘HMS Gaspee.’ In 1775, he became the Commodore of two emigrant ships. He was appointed to the post by the Rhode Island General Assembly. He directed his men to capture the ship ‘HMS Rose.’ In 1776, he commanded the ship ‘Columbus.’ In the same year, he was appointed the captain of the Continental Army.

In 1778, Abraham Whipple commanded the ship ‘Providence’ which tackled British vessels such as ‘HMS Lark.’ The tackling enabled him and his men to cross the Atlantic Ocean. In 1779, he was made the manager of three ships, ‘Queen of France,’ ‘Ranger’ and ‘Providence.’ With his leadership, the ships defeated the British. In the same year, he battled British forces at South Carolina, but they were not successful. In 1780, he became a prisoner of war. He also led other vessels such as ‘St. Clair’ and ‘General Washington.’

In 1761, Abraham Whipple married Sarah Hopkins with whom he had three children, John, Mary, and Catherine. He died on May 27, 1819, in Marietta in Ohio. He died at the age of eighty five. He was buried at the Mound Cemetery in Marietta. He is significantly recognised as having contributed significantly to the American Revolution.