You are an Aquarius if your birthday is between January 20th – February 18th. The Aquarius man personality is an independent spirit who wants to do whatever he can to make the world a better place, not only for himself, but also for others.

The Aquarius man traits show he may have an odd approach when it comes to changing the way that he and others look at the world, but as his friends get to know him better, his ideas will seem like something crafted from some of the world’s greatest minds.

The Aquarian will likely start off with an idea that seems off the wall, but as he develops the idea more it should start to make sense to others, and not just himself anymore. 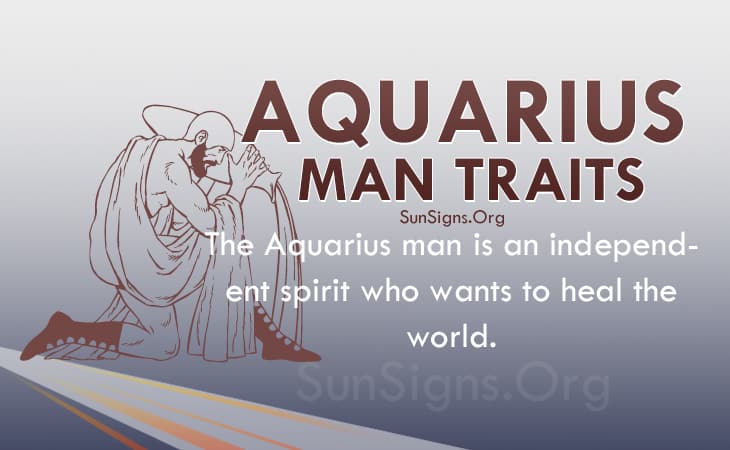 When the Aquarius man personality traits show he is still a boy in school he is more likely to find interest in more creative classes like English or music, and less likely to find joy in math or science.

This is because the Water Bearer has an inner drive that motivates him to be creative. He won’t want to be stuck doing boring or repetitive tasks. In math there is usually only one right answer to a question, and the Aquarius boy isn’t likely to like that.

The Aquarius man characteristics show he is more likely to thrive when it comes to homework assignments that involve writing essays, creating stories or poems, or making something with his hands in an art class.

The Aquarius male won’t be happy unless he can be creative. The two simply go hand in hand with each other when it comes to the Aquarius man.

The Aquarius man traits show he is not all whimsical; he is also determined and ambitious. While his dreams may not include becoming the CEO of a large company, he will still want to do something important in his life.

When it comes to short-term goals, the Aquarius man personality will not stop working on them until he gets them done. The Aquarius man is not one to become distracted while working on a goal or side-tracked onto another activity.

His mind is bursting with ideas and things to do, and his determination motivates him enough to accomplish many of his goals throughout his lifetime.

The Aquarius man traits show he is also quick to making friends. His creative nature is likable. He is many to have many friends, but not many close friends. He likes to talk to others and share his ideas, but he will prefer to only share his deeper and more sensitive feelings with only the closest of his friends or his partner.

The Aquarius man personality traits show he will want to travel and see the world during his lifetime. He is likely to become bored with his surroundings quickly. The Aquarius male also requires a certain amount of freedom to be able to go where he wants and do what he pleases.

If he cannot get out of his normal environment every once in a while then he is prone to become ill-tempered. It is like the opposite of home-sickness with the Aquarius guy. He sometimes is sick of home and needs to see other places and experience new opportunities.

If the Aquarius man doesn’t have the money to travel to some exotic place, then he may even just want to take a road trip to a couple of cities over just to help him to get out of his funk.

When it comes to romance, the Aquarius man characteristics show he is more likely to want a partner who he can share his ideas with. He could care less what his partner looks like, so long as they are alike.

He will want a partner that is willing to go on adventures with him and share his creative vibe. This sort of romance will lead to a strong relationship between the couple.