Pluto in the Tenth House of the Natal Chart

What happens when Pluto is in 10th House? You are a traditional person who is focussed on achieving your goals.

In astrology, Pluto plays upon your need in the tenth house to oversee everything, making you come off as a control freak at times. You are effective and efficient and never apologize for that. But, you can also come off as stuffy or boring. Be mindful of the image you are portraying.

Planet Pluto is symbolic of subversion, isolation, rebirth, power, and transmutation. Because of your ambitious nature, you take charge automatically so you can climb the corporate ladder as steadily as possible. While this makes sense to you, you may not notice the other people’s toes, you step on along the way in your career. 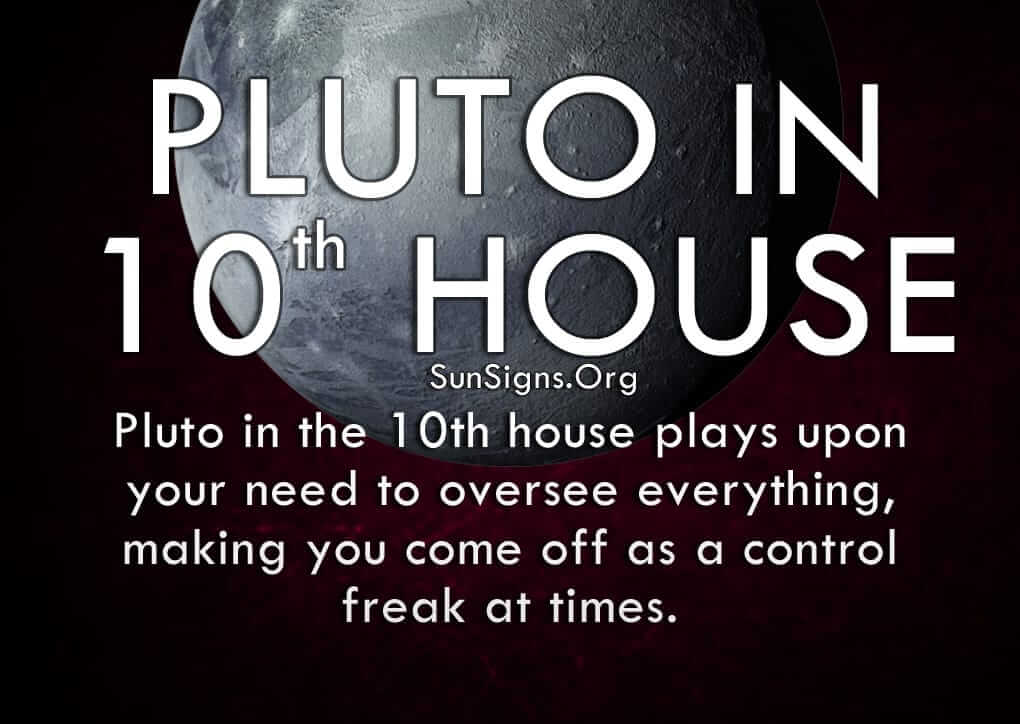 Pluto in the tenth house shows your strength and stamina is admirable to your company’s higher-ups, But, they probably have a love-hate relationship with their co-workers. There are those who will appreciate all your efforts and want to work with you in a group, while others will think you are acting like a teacher’s pet.

It’s important to be able to work with all kinds of people. So, practice different techniques for handling a variety of personalities. You can get your point across when you need to. So, focus on that ability and work it into your everyday dealings in the office.

Your determination helps you in other areas of your life as well, although you have to be careful not to fall under the impression that you have control over everything.

Pluto in 10th house personality are fully capable of making things happen in your life; it may not always turn out the way you wanted. There’s always the possibility of unforeseen circumstances, no matter how carefully you plan something. It’s how you handle these hiccups that determine the kind of person you are. Some in the tenth house fear the unknown because you are perfectionists and need things to work out in a certain way.

When it doesn’t, you become lost and have to find help. Others in the tenth house fear to go against tradition and being seen as someone who can’t handle their responsibilities. You tend to be more on the conservative side, and that can hinder your ability to get out of a sticky situation. Use your ambition and integrity to figure out something that works in your marriage.

You have trouble with change unless it’s a slow and steady climb to someplace better, and that can put a damper on your progress if you’re not careful. Try to embrace change and see it as a necessity for emotional and spiritual enlightenment. Know your Pluto power sign to understand this better.

With Pluto in 10th house, being in a comfortable place in your life is important to you. That is why you put so much effort toward your career and building a stable bank account. In this case, change is mostly a good thing as long as you see that balance in your checkbook rise. But you fear it going in the opposite direction, and that can become a self-fulfilling prophecy before you know it.

Don’t stop your forward momentum. Work on taking whatever comes your way and turning it into a positive outcome. You can’t control everything in life, but you can control your reaction to it. Use your resourceful nature to change any negative into a positive. It won’t be easy, but you love a challenge. It’s all about getting things to work in your favor, and if anyone can do it, it’s you.