The Vishakha Nakshatra spans the cusp of Libra and Scorpio. It is represented by the four stars which form Libra’s scales. Also known as the Star of Purpose, the Vishakha Nakshatra is governed by Indra, king of gods and Agni, the fire god. As such, these can be relatively spiritual people.

The Vishakha birth star is symbolized by a potter’s wheel or monumental archway (think of the Arc de Triomphe, in Paris). The potter’s wheel is indicative of the native’s inner turmoil and continuous transformation. The arch speaks to their determination and ability to preserve and achieve long-term goals.

Independent folks, the Vishakha native tends to have a keen sense of justice and is known to be somewhat self-righteous. Determined to succeed, they will achieve their desires during their later years. While they are recognized to be determined and persistent, these people tend to lack emotions and compassion.

Often non-conformists, they are prone to make their own path and reject most trends. Engaging and outgoing, the natives of Vishakha Nakshatra are generally extroverts. 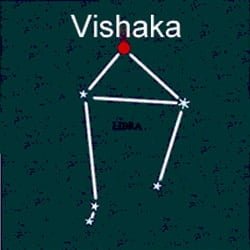 Attractive and charming, the Vishakha possess a natural beauty. Unlike most of its sister Nakshatras who are generally present in one form, the Vishakha native may take one of two physical portraits. They will either be tall with a little excess weight, or they will be short and lean.

The natives of Vishakha Nakshatra are bestowed with great inner strength and strong minds.They tend to be sensible, down-to-earth and spiritual people who follow their own walk of devotion. The open-minded Vishakha is adaptable and has a preference for the newest technology, tool, or gadget.

These people may seem to contradict themselves at times. Their sense of justice demands they view each circumstance independently and this may be difficult for others to understand when the Vishakha’s opinions change in seemingly similar circumstances. Natives of this Nakshatra require plenty of time to themselves in order to maintain their balance.

Ambitious and determined, the Vishakha native is able to overcome any rivals or obstacles they encounter on their path to professional success. Strongly competitive, they must be weary not to force their beliefs and opinions onto others. They must also be mindful not to use their charm and intellect to manipulate situations and people in the workplace.

The people of Vishakha Nakshatra have a flair for words and are known to be excellent public speakers, writers, actors and counselors. Fiercely independent they find working independently to be most satisfying as they can have the flexibility they need to be satisfied professionally.

Ironically, though they are not known for their financial management abilities and prone to reckless spending, they are often found in working in the financial sector. They are also commonly found to work in education and publishing. The most spiritual Vishakha will make their way in the world through their faith as pastors, priests, spiritualists and in other religious professions. 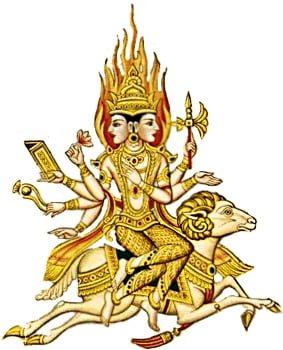 The natives of Vishakha Nakshatra generally receive little support from their parents, even as infants. Their mothers are prone to early death and their fathers are typically absent until the native reaches their 20s.

The independent Vishakhas are known to succeed despite their difficult childhoods. The lack of parental direction may lead the Vishakha to participate in illegal and immoral activities. Having been betrayed by both parents, it is difficult for these folks to trust others and form lasting relationships.

Typically blessed with stable health, the Vishaka natives are prone to paralysis and asthma. When experiencing extended periods of imbalance they tend to abuse drugs and/or alcohol.

Share
Previous Swati Nakshatra
Next What Is The Heart Chakra?