Pluto in the Fifth House of the Natal Chart

What does Pluto in the 5th house mean? These people have to learn to earn respect and not fear.

You express yourself through creative endeavors in the fifth house, and Pluto allows you to redefine who you are regularly. You’re not afraid to try new things and are first in line among your friends and family. The only thing you do fear is betrayal in love.

Planet Pluto is symbolic of rebirth, regeneration, healing, obsession, and control. With Pluto in the fifth house, you are powerful and often seen as fearless, which is true in most cases. Your passion for life and love is unparalleled, and you are fiercely protective of your loved ones. The one thing that can break your control over something is your ego.

You don’t know how to love any other way, and you expect that same kind of love in return. Just be careful not to put too much pressure on your partner to reciprocate in the same way you do things. Sometimes you go overboard with your display of affection, and that makes it hard to compete. You should be equals not competitors in your marriage or career. 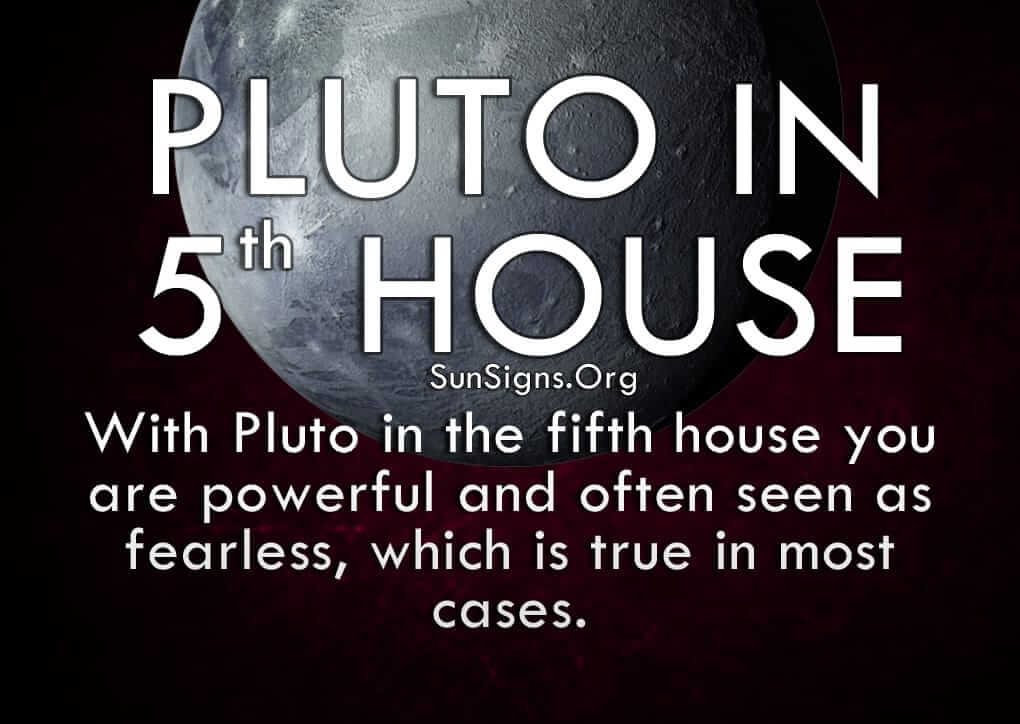 Pluto in fifth house astrology shows that you usually give your all when you do anything in your life, but this kind of fear can hold you back from achieving greatness if you’re not careful. Figure out what’s going on behind the scenes by putting everything out in the open.

You enjoy good conversation and debate, so talk about your ideas and flesh them out with others before deciding whether or not they will work. This will bring others into your inner circle and make them more confident about the outcome. Don’t let the fear of other people’s expectations stop you from making your dreams a reality.

Pluto in 5th house personality often feel invincible. So, when something happens that’s beyond your control, you have difficulty handling it. This is true of lost family members, partners, and friends, whether through time or distance or death. If you feel your significant other has slighted you in some way, even with the faintest hint of infidelity, you believe they have betrayed you. This can lead to feelings of jealousy or possessiveness that are in no way warranted. You have to be careful not to assume the worst. Talk to your partner before deciding the fate of your relationship for good.

This can be a tricky situation for you, as you fall hard for someone and want to be with them all the time. You need constant attention and love putting on a show. Being in a relationship allows you to be as heartfelt and romantic as you want to be.

For some, this can be overwhelming, and they don’t know if they can keep up with your intensity. But for those who enjoy a challenge, they will work to stay next to you every step of the way. And that’s the kind of person you’re looking for – someone willing to work hard and play hard for the long haul.

Your Pluto sign can also affect your self-esteem when it comes to your imagination. You have these grand ideas for moving forward, but sometimes you sense that not everyone around you shares in the same enthusiasm.

That’s when you begin to doubt yourself and question whether or not the idea was that good, to begin with. This begins a downward spiral toward potential remorse or regret if you don’t address the issue head-on.