When tarot and numerology are combined you gain a reading with deep insight into the personality of the individual. The symbols may not be in total agreement but each tarot card is representative of a number and therefore a numerological reading is practical and effective.

Many of us are seeking additional guidance in life and this is certainly one of the means available to gain that guidance. Get your free online Tarot Card Numerology Reading today.

Both Tarot and numerology are a very popular means of divination. The life path and destiny numbers that have been determined through a calculation based on the date of birth are also associated with a tarot card.

Tarot card numerology readings interpret your personality in detail both positive and negative and determine the ruling planet. This provides insight into your character and aids in determining areas where you may need to make improvements.

It is a fact, although most of us were not aware of it, that the science of numbers is in fact related to the sequence of the tarot cards numerologically.

Each card in the tarot is strongly associated with the appropriate number. These numbers are based on the numerological principles and represent a spiritual growth process that ranges over the numbers one through nine.

While the tarot is commonly used to examine personal concerns through reading it is possible to actually create by combining numerology and tarot personal tarot cards set based on your name and date of birth. If you were to use this personal set of cards you would have a very different reading.

As one example in this set, only the growth cards ever change. While most readings focus on those things that come and go in life, the cards in the personal deck would represent factors that will be with you throughout life. Most of us are very used to getting what we want in our lives. This would be no exception.

We’re all looking for means to emphasize our virtues skills and eliminate our flaws. This type of reading because it is very detailed on the personal side can be very helpful in away. 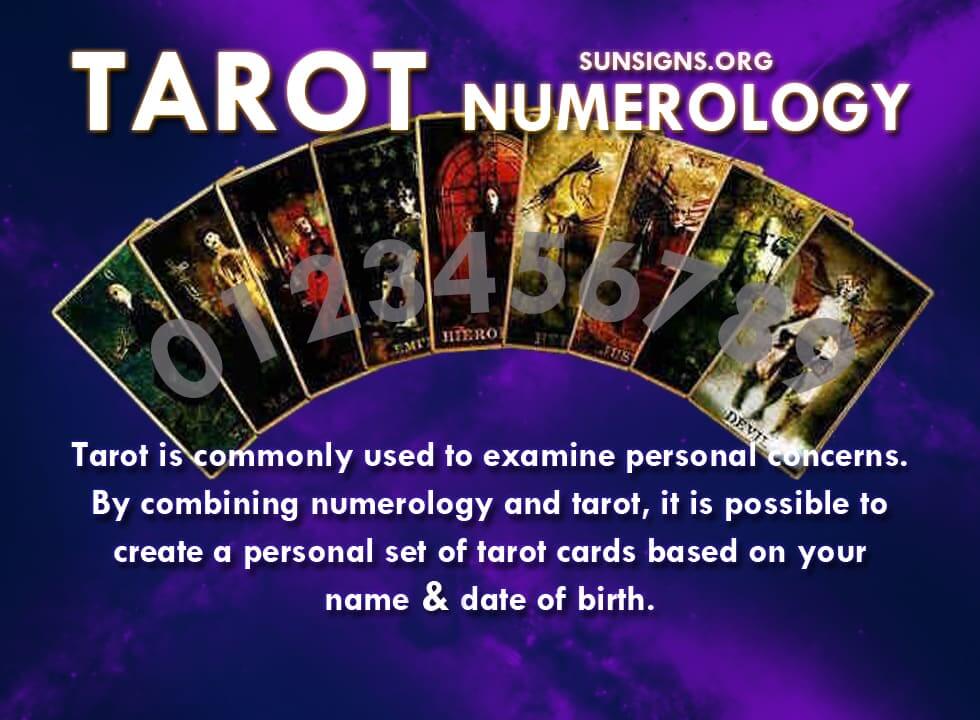 With the 78 cards in the Tarot, each of which has a meaning derived from the study of numerology it is the number on the tarot cards which reflects its numerological importance. With the minor arcana as an example cards reflect feelings present in our everyday life in ongoing events.

The major arcana cards are more inclined to be representative of attributes related to the mundane: the spiritual, financial, familial matters, and more. It is through the combination of meanings of the numbers that one is helped to achieve a deeper understanding of numerology with the use of the tarot cards.

The Fool: A choice is offered – Inexperience 01 – The Magician: Creative Power – Activity 02 – The High Priestess: Hidden Influences – Love 03 – The Empress: Material Abundance – Fertility 04 – The Emperor: Leadership – Organization 05 – The Hierophant: Rule by the conventional 06 – The Lovers: A choice between two loves 07 – The Chariot: Conquest of the mind

These are the 21 cards of the Major Arcana – I have included the basic keywords for each card. Remember we also have the Minor Arcana, and each and every card is represented fully by its numerical value to each Card, a number is designated and to each person, one card will relate to your numerical Life Path. The keywords do not display yourself, but, when having a chart done, the Cards, the Planets, and of course the energy and vibration of each and all of your numbers are studied fully by In-Depth-Numerology.

To learn more about your Card selecting a birth chart will reveal all that is within your make-up as an individual.

THE FOOLS JOURNEY – The 22 Cards Of The Ancient Art Of The Tarot
‘0’ The Fool is the soul of every man, which after it has clothed itself with a body, a man appears upon Earth and goes through the life experiences depicted within the 21 cards of the Major Arcana of The Tarot.

In the Magician ‘1’ and the High Priestess ‘2’ The Fool learns the use of the conscious and the unconscious mind, in order to create the bounty of nature as pictured within the card ‘3’ The Empress. ‘4’ The Emperor indicates the role of the ruler and ‘5’ The Hierophant shows that of a religious body. In ‘6’ The Lovers card man learns that in order to have a harmonious life, the super-conscious must be consulted by going through the sub-conscious mind.

Using His Mentality and Will the Fool can ride the Chariot ‘7’ of success as long as he can master his passions within. The woman shown in the card ‘8’ Strength, shows him how through the use of spiritual strength and love, he can control, not only the animal world around him but also the lower forces within himself.

The Hermit ‘9’ holding his lantern of ‘Truth’ offers to guide him upon his spiritual path. When the Fool reaches The Wheel Of Fortune ‘10’ his apprenticeship is now over, from here on he is on his own, to rise or to fall while the Sphinx of his soul looks on. In Justice ‘11’ he learns to have a balanced personality and to rid the outworn and useless in life.

He is then The Hanged Man ‘12’ who has surrendered himself to spirit and has sacrificed his small desires for the greater one. Key ‘13’ shows the Death card can also be a form of renewal and is not to be feared. In key ‘14’ Temperance’, the Archangel shows him (The Fool/Man) how to create by pouring the ‘water of life’ from the unseen to the seen.

He has been shown all of the secrets of Life and how to use them, yet he is tempted by card ’15 The Devil, to use his power to create a life of selfish gain and material pleasures. In The Tower card ‘16’ The Fool/man, is knocked from his material Tower and awakened by a flash of ‘spiritual insight towards the knowledge that he has on Earth, to learn and to put to good use, he must give’ this eternal knowledge.

He now learns to meditate and he discovers that no destruction is final, for he learns to follow card ‘17’ The Star of his intuition, his inner guidance. Once again key ‘18’ The Moon, the Fool is tempted, this time to use his psychic powers for personal gain and glory, and he finds the upward path not only crooked but full of pitfalls.

Finally in card ‘19’ The Sun he learns his lessons well and they then become automatic. He rides forth in control of the physical plane, naked to the eye, for he no longer has anything to hide. The red feather in his hair shows he has no authority over the animal kingdom and the sunflowers that turn towards him are an indication that all nature turns to the developed soul for future growth.

Next, he joins the Archangel in the card Judgement key ‘20’ by calling all men to awaken to the glories of the spiritual life – it is then his journey is over. In card ‘21’ The World the Fool is Spirit again, as he was in the beginning, but now he has passed through his initiations on the material plane where he has played many parts and has also learned to control as he dances The Dance Of Life in the very center of the Universe.