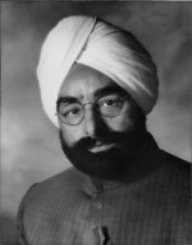 Zail Singh was born 5th May 1916, to Bhai Kishan Singh, and Mata Ind Kaur. He was born in the Faridkot district of Punjab, India. His father was a carpenter, and the family was quite poor. There were six children in all, five brothers and a sister, and Zail Singh was the youngest. When he was only a youngster, his mother died, and the children were raised by their aunty after that.

Zail Singh’s family was very religious, and by an early age, he was well-versed in the scriptures of the Sikhs. He began studies at the Shahid Sikh Missionary College at Amritsar, even though he hadn’t completed high school. During his time at college, he was given the title “Gyani” because of the knowledge he had in relation to Guru Granth Sahib.

With the reorganization of India, Zail Singh opposed Harindar Singh, who was the ruler of Faridkot State in 1947. Singh was imprisoned and persecuted for a period of time. Under the rule of Chief Minister Gian Singh Rarewala, in 1949 he was appointed as Revenue Minister for the Patiala and East Punjab States Union. In 1951 he would become Minister of Agriculture.

In 1956, he became a member of the Rajya Sabha, which is the upper house of the Indian parliament. He was a member until 1962. In 1972, Zail Singh was elected to the position of Congress Chief Minister of Punjab. In 1980, he was elected to the 7th Lok Sabha (lower house of the Indian parliament), at which time he became Minister of Home Affairs in the cabinet of Indira Gandhi.

In 1982, Zail Singh was elected unopposed to the position of President. Zail Singh was the first Sikh to be appointed President, a position he held from 1982 to 1987. As part of his duties, Zail Singh met with Gandhi every week to be briefed on state affairs. She did not mention Operation Blue Star to him, which occurred early June 1984, which involved the killing of Sikhs. Gandhi was assassinated later that year, and Zail Singh was called to explain why he didn’t take action against the operation.

After Gandhi’s assassination, Singh appointed her eldest son, Rajiv Gandhi, to the position of Prime Minister. Zail Singh published his memoirs in 1997, called Memoirs of Giani Zail Singh: The Seventh President of India.

Zail Singh married Pardhan Kaur, and the couple had four children together, a son and three daughters.

Sadly, Zail Singh was in a car accident in 1994 and sustained multiple injuries, which took his life a few weeks later.