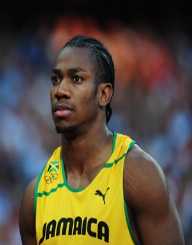 Yohan Blake is Jamaica’s junior record holder over the 100 meters sprint. Known as the Beast, he is also the second fastest man in history over the senior 100 and 200 meters sprints.

Yohan Blake was born December 26, 1989, in St. James Jamaica. He is the son of Veda and Shirley Blake. He is one of the two children in the family, the other one being his sister Arlene.

He attended a local elementary school and graduated from St. Jago High School in Spanish Town, St. Catherine’s Parish. Blake was athletic from an early age. He loved playing cricket, a sport that is popular on the island nation. He was a regular member of his school team on several occasions. His principal prevailed upon him to try track and field athletics after watching him run during a cricket training session. Blake obliged and switched to a sport that would one day make him a global phenomenon.

He made his competitive junior debut in 2005 in Trinidad and Tobago. He represented Jamaica in the Caribbean Free Trade Area [CARIFTA] Junior Championships. He won gold in both the 100 and 200 meters sprints in the Under 17 year’s category. Blake dominated the CARIFTA junior events winning all the competitions he entered. In 2006 he won gold in 200, and 4 by 100 meters events held Guadeloupe, Lesser Antilles. Later that year, Blake competed in the Central American and Caribbean Junior championships held in Trinidad and Tobago. He won three gold medals.

Blake graduated to the senior level category in 2009. He competed in the Grand Prix races against the global best. After running in the global event, Blake was found to have used banned substances by the athletics anti-doping governing body. He received a three months ban from any competitive event. It took him three years to make his comeback.

In 2011 Blake made his comeback in the world championships in Daegu, South Korea. He won the 100 meters event, beating his much fancied and fellow Jamaican Usain Bolt to the second position. Blake won the 100 meters relay with the Jamaican team set a new world record in Daegu.

Blake has competed in various events in recent years. Owing to tough competition from the Caribbean and American athletes, his star has not been shining at its best. He is one of the two sprinters ever to beat the great Usain Bolt. He is also the youngest sprinter to have made a run under the 10 seconds mark barrier.

Like most people in the Caribbean, Blake has a kind sport for cricket. He still passionately follows the sport during his free time. He participates in charity matches in his native Jamaica.

In giving back to society, Blake is deeply involved with charitable organizations. In 2011 he founded the YB Afraid Foundation. This foundation helps the less fortunate masses in the community in various aspects of life. It offers educational help, social amenities, mentorship amongst many other projects.

He is a world-beating sprinter who has made his mark in athletics. Unlike many others, he made a comeback after a doping scandal to erase the ugly period of his career.