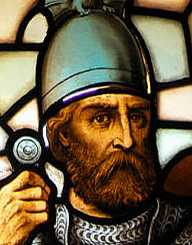 Sir William Wallace was one of the Scottish knights that were born on April 3, 1270. In his lifetime he was one of the few Scotts that took up the duty to fight for free Scotland from the British rule. Therefore, he was also one of the leaders that led the revolution against the English and won so many times. Williams' first significant defeat of the English was at the Battle of Stirling Bridge. Therefore, the Scotts pushed him into power.

Thereby, they made him one of the first leaders to ever unite Scotland under one leader. In his capacity as the Guardian of Scotland, William ruled until they beat him at the Battle of Falkirk. This was in the year 1298 in July. The English managed to capture, the fantastic William in the year 1305 in Robroyston, Glasgow. The King, Edward I of England, therefore, found him guilty of multiple offenses.

Some of these offenses include crimes against English citizens and high treason. Therefore, the King made sure that he hanged William for his ‘offences.’ Upon his death, the Scotts have bestowed upon his name great glory. Therefore, William became one of the legends and heroes of Scotland ever since. Also, a film made to honor his memory, Braveheart that went on to win an Academy Award.

Sir William Wallace was a member of the noble families in Scotland. However, his nobility status was one that was of minor importance. Therefore, most of his family early life is not clear as per historical findings and events. Although some of the historians have made an effort to unearth most of the early life of William. Some even state that Sir William Wallace was born to a crown tenant by the name Allan Wallace.

However, others also claim that William was the son of Sir Malcolm of Elderslie. Therefore, as per this fact, William was born in Elderslie, Scotland. On the other hand, there are some of the historians that state that the Williams family were English immigrants to Scotland. Hence Williams surname name Wallace to mean foreigner.


The Cause of the Rebellion

As a young man, William Wallace grew up under the rule of King Alexander III. During King Alexander's rule, there was a lot of peace and harmony in Scotland. Also, the economy of the region was stable enough to support members of the Scottish kingdom. However, the king died, and some of the Lord of Scotland set up a government of guardians. The guardians were to rule Scotland till Margret would be able to take over as the new Queen of Scotland.

However, the new queen fell ill and died before ascending to the throne. Her death led to a gap that the Scotts refer to as the Great Cause. After failing to have a clear ruler in Scotland, the Lords invited King Edward to help them arbitrate. However, up his arrival, Edward demanded that the Lord recognize him as the Lord Paramount of Scotland. Also, he belittled the then sitting King John who later renounced his claim to the throne of Scotland. The English king then launched a series of attacks on the Scotts defeating them at the Battle of Dunbar.

After a year of oppression by the new regime of English men, William Wallace assassinated an English High Sheriff of Lanark. In due time, William together with some of his allies then started out carrying attacks on the English men across Scotland. However, during this period, the Scottish noblemen paid homage to the English King. This treacherous act brought back the efforts of the rebellion. However, William and his friends did not pay tribute to the King. Therefore, they went on to carry savage attacks on the English men. Later the rebels including William and Moray joined up and merged their forces.

This is one of the battles that saw the English men appreciate the efforts of the Scottish men in the matters of war. So, on September 11th, of the year 1297, both sides went to war. Both William and Moray with their joined forces dealt the English a deafening blow. The incredible part of the story is that the English had a more significant power than the Scotts. However, the Scotts had much better generals in the war front with better tactics. In no time William and his army defeated the English.

Upon the end of the war, William Wallace and his ally Moray were named the Guardians of Scotland on behalf of King Balliol. However, Moray died soon after from his battle wounds. The English did not take their defeat of the army well. Therefore, they were angry and wanted reparations. Moreover, they said that the Battle of Stirling Bridge was more of luck.

After some time, King Edward made sure to send a new invading party to Scotland. The Scotts under William Wallace did not want to engage in any open battles. Therefore, they waited for the English soldiers to run out of supplies and money. After sometime William made his move against the English men at Falkirk. However, the English were well organized at that time around. Therefore, Williams forces were defeated.

After his defeat at the Battle of Falkirk, William Wallace went into hiding from the English soldiers. However, he was captured and taken to King Edward I by some English loyalist. They took him to London where he was put on trial for high treason. After he was found guilty of all the charges and sentenced to hang. So, they hanged, but before he could die took him down, tortured him then beheaded him. Sir William Wallace, the Guardian of Scotland, died on the 23rd of August 1305.