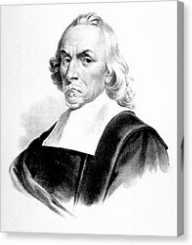 William Harvey (1578-1657) was an English physician and naturalist. He is most recognized for being the first person to accurately describe the circulation of blood in the body, including the function of the heart.

As a young boy, Harvey attended King’s School in Canterbury, where he lived with an uncle. In 1593, when he was 15 years old, he enrolled in Gonville and Caius College, in Cambridge. Harvey graduated with a Bachelor of Arts degree in 1597. From there, he traveled to Italy to study medicine. In 1599, he was enrolled at the University of Padua and graduated in 1597 as Doctor of Medicine at the age of 24. Upon his return to England, he received the title of Doctor of Medicine from the University of Cambridge.

After his studies, William Harvey settled in London. In 1604 he joined the Royal College of Physicians, and a few years later he was elected to a position at St. Bartholomew’s Hospital. Later on, he would be selected as Censor of the College of Physicians on three separate occasions: 1613, 1625, and 1629.

In 1615 Harvey became a Lumleian lecturer and specialized in teaching surgery and anatomy. His work as a physician and lecturer started gaining notoriety, and in 1618 he was named physician of King James I. His services were also requested by several aristocrats of the time.

His method for learning about the human body was through dissection and observation. In 1628 he published Exercitatio Anatomica de Motu Cordis et Sanguinis in Animalibus (De Motu Cordis for short). In it, William Harvey described the circulation of the blood from the heart through all the body and back to the heart. His work earned him sharp criticism from some scientists, although it was eventually accepted.

From 1632 on, he became the attending physician of King Charles I. During the Civil War he continued his work and then followed King Charles to Oxford. In 1642, while in Oxford, he was named Doctor of Physic, and in 1645 Warden of Merton College.

From then on, William Harvey began retiring from public life. However, in 1651 he published his second major work, titled Exercitationes de Generatione Animalium. Eventually, he left his position in St. Bartholomew’s hospital. Although he was elected President of the College of Physicians in 1954, he refused.

William Harvey’s most famous work was De Motu Cordis (1628), translated in English as Anatomical Studies on the Motion of the Heart and Blood in Animals. He became the first person to accurately describe the flow of blood as continuous and unidirectional, showing that the arteries and veins form a complete circuit. He also correctly explained the function of the heart as the pump of the circulatory system and included a detailed description of it. Furthermore, he told that venous blood was changed to arterial blood in the lungs. He backed his explanations with drawings from experiments he had performed.

William’s second major work was Exercitationes de Generatione Animalium (1651). In it, he explored and described the development of the egg, as well as the embryonic development of viviparous animals. He concluded correctly that new organisms gradually develop from the ovum, and are not already present in it, as was previously thought. His work also refuted the spontaneous generation theory. However, his experiments were performed without the use of a microscope, and this limited his observations.

William Harvey was a pioneer of human anatomy. His work helped debunk the previously held teachings of Galen (129 AD- 210 AD), who had described the liver as the center from which blood originates. Harvey was also a big supporter of knowledge based on experimentation and observation.