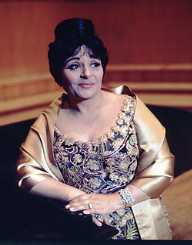 Victoria Lopez Garcia was born in the city of Barcelona, Spain, on November 1, 1923. Her mother, Victoria Garcia, was a cleaning lady. Her father, Bernardo Lopez Gomez, was a caretaker at the University of Barcelona. Her family was quite musical, so she started to sing and play instruments at a young age. She enrolled at the Barcelona Conservatory, where she studied singing, piano, and guitar. She was mentored by Dolores Frau and Graciano Tarrago. She decided to take the stage name Victoria de Los Angeles.

De Los Angeles made her opera debut as a student in 1941. She played Mimi in La Boheme at the Gran Teatre del Liceu in Barcelona. She then joined an ensemble called Ars Musicae. Her experience there allowed her to specialize in Spanish songs, French songs, German lieder, Renaissance music, and modern music. She made her professional opera debut in 1945, playing the Countess in the Marriage of Figaro. In 1947, she was the winner of the International Music Competition in Geneva. This gave her attention from international audiences and her career began to take off.

De Los Angeles performed in the Palais Garnier in Paris, the Royal Opera House in London, La Scala in Milan, and Carnegie Hall and the Metropolitan Opera in New York City. She also toured in South America, Asia, Australia, and the Middle East. Her most famous work was her lead role in Carmen. She starred in other renowned operas, such as Otello, The Barber of Seville, and Madame Butterfly.

De Los Angeles released many records with her performances from different operas. They include La Vida Breve, La Boheme, Manon, Madame Butterfly, and others. In 1990, she released a collection of French folk songs called ‘Chants d’Auvergne’. In 1992, she made an album called ‘Traditional Catalan Songs’. The following year, she gathered up all of her recordings in the collection ‘The Fabulous Victoria de Los Angeles’.

Victoria de Los Angeles is considered one of the greatest sopranos of all time. She won six Grand Prix du Disque awards, an Edison Award, an Ondas Award, and many other prizes. In 1994, the government of France gave her the award of the National Order of the Legion of Honor. She became a part of the Grammy Hall of Fame in 2000.

In 1948, she married a man named Enrique Magrina. They had two sons, named Alejandro and Juan.

De los Angeles suffered from a respiratory disease. She passed away on January 15, 2005, at the age of 81. She was buried at the Montjuic Cemetery in Barcelona.