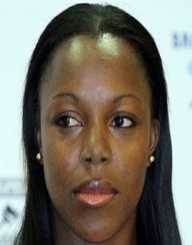 Veronica Campbell Brown was born on May 15, 1982, in Clarks Town, Trelawny, Jamaica. She is the youngest Jamaican field and track sprinter female ever to win an Olympic medal. Veronica is an expert in both the 100 and 200 meters races. She won the 2012 Olympic races in London making her a sixth-time Olympic medalist.

Veronica Campbell-Brown was born on May 15, 1982, to Cecil Campbell and Pamela Bailey. She was born in Clarks Town, Trelawny, Jamaica. As a child, she displayed a talent in athletics although her hometown never had facilities to nurture upcoming athletes. However, she was still determined to be a great athlete. She went to Troy Primary and later attended Technical High School in Clarendon on a scholarship.

While still a high school student in1999, Veronica Campbell-Brown won two gold medals at the IAAF World Youth Games in Bydgoszcz, Poland. She participated in the 100-meter and 4-by-100 meters categories both of which she emerged winner. In 2000, she enrolled at Barton County Community College in Great Bend, Kansas. She participated in the junior college titles that year and won the 60, 100 and 200-meter races.

At the Sydney Olympics, she grasped a silver medal at the 4-by-100 meter race. She went on to make other wins at the World Junior Championships in Santiago, Chile in the 100 and 200-meter races. In 2000 she completed her studies at Barton and graduated with a 3.8 GPA.  She joined the University of Arkansas where she became a member of the sprint squad.

Veronica Campbell-Brown participated in the 100-meter race in the 2004 Athens Olympics with the hope of a win. She was not successful and only took home a bronze medal. However, in the 200 and 4-by-100 meter races she scooped gold medals in both races. In 2005, she participated in the 100 and 4-by-100 meter races at the World Championships held in Finland and won silver medals in both. She received her BA from the University of Arkansas in 2006. In 2007, she won a gold medal in the 100-meter race at the World Championships.

Veronica Campbell-Brown also won silver medals for both the 200 and 4-by-100 meter races. At the 2008 Olympics in Beijing, China, the Jamaican team was leading after knocking out Russia in the first round of 4-by-100 relays. Germany and China were also victims of the knock out with Jamaica proving its prowess as the fastest team. However, in the finals, the team never did well and never made it to the end. Campbell, on the other hand, won a gold medal in the 200-meter sprint attaining the best time of 21.74 seconds. She became the second woman in the Olympic history ever to defend a title in the 200-meter race.

In 2009, Veronica Campbell-Brown was appointed by UNESCO as its Goodwill Ambassador. She urged the need for promoting gender equality in various sports. She continued to excel in sports winning several races including the 60-meter gold medal in 2010 at the World Indoor race. In 2011, she became second at the World Championships. In 2012, she participated at the Olympic Games in London competing in both the 100 and 200-meter sprints. Although she never defended her 200-meter title in the games, she received a bronze medal in the 100-meter race. This was her sixth Olympic medal.

In 2013, Veronica Campbell-Brown was taken to undergo testing for an illegal substance with the anti-doping agency. She tested positive but denied the charges stating that she never took the substance willingly. Veronica claimed that the substance might have been in the injury cream she was applying. She was lucky to be off the hook from the Jamaica Athletics Administrative Association. She was also cleared by the International Association of Athletics Federations

Veronica Campbell-Brown got married to Omar Brown who was also a Jamaican sprinter. The couple currently resides in Clermont, Florida. She is thirty-six years old now.