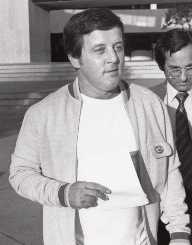 Tony Spilotro was an American gang member of the criminal group Chicago Outfit. He was also known as Tony the Ant, or Tough Tony.

Anthony John Spilotro was born in Chicago on May 19, 1938, to Italian immigrants Pasquale and Antoinette Spilotro. He was one of the six sons in the family. He grew up in the North Melvina Avenue neighborhood. He witnessed criminal activities from an early age. North Melvina was the melting point of Italian criminal members in Chicago. In his family, only one brother survived the streets to graduate in the university. Spilotro started his educational journey at Burbank Elementary School. In 1953, he joined Steinmetz High School. He dropped out of school for a life in the criminal world.

After dropping out of school, he started his criminal life with petty crimes. He shoplifted, mugged, and snatched women of their purses on the streets. On January 11, 1955, he was arrested by the authorities in Chicago. He was charged and convicted of larceny and fined USD 10. He was freed and put under a probation officer. He continued breaking the law and was arrested severally. When he turned 21 in 1959, Spilotro had been apprehended by the police 13 times.

He was initiated into the Mafia by Sam DeStefano, the Chicago Outfit enforcer in the neighborhood. Spilotro was commissioned to eliminate two young burglars. Bill McCarthy and his friend Jimmy Miraglia ventured into DeStefano’s territory earning a death sentence. Spilotro carried his assignment with precision. He toured his victims before killing them. He squeezed McCarthy with a vice, crushing the skull, and popping out the eyes. Spilotro slit their throats open and dumped their bodies. The police discovered their decomposing bodies in a used car on May 15, 1962.

Spilotro earned the trust of DeStefano. He worked as the hand man of DeStefano for a while. In 1963, Spilotro shot to death, Leo Foreman. Foreman was a housing agent responsible for kicking out De Stefano out of his office. Spilotro sent a message to the rest. Unable to find him in the open, he lured Foreman to DeStefano’s house. When he arrived, Spilotro shot him to death. Spilotro was assigned to oversee the Chicago Out’s interests in Miami, Florida. He left for Miami in 1964. He developed a close relationship with Frank Rosenthal. Rosenthal owned most of the casinos and other businesses in the area. Spilotro returned to Chicago three years later in 1967.

He was assigned another mission in Las Vegas in 1971. He replaced Marshall Caifano as the Outfit kingpin. In Las Vegas, he parted ways with his erstwhile friend Rosenthal who had several casinos in the town. Spilotro ventured into his own business. He bought a gift shop with a casino in the Circus-Circus Hotel under the disguised identity of Tony Stuart. He inflated the price ten times the purchasing price and sold it at USD 700,000. The same year 1974, he started a shylocking business with another mobster Frank Bompensiero. Bompensiero was the leader of the Los Angeles mafia. In November 1975, Spilotro traveled to San Diego for an assignment. Spilotro eliminated San Diego business lady Tamara Rand for suing mobster Allen Glick over a loan of USD 2 million.

In Chicago, he teamed with his brother Michael and Herbert Blitzstein to start a jewelry shop. The shop sold jewelry during the day and was a base of crime during the night. The trio drilled holes through the walls to access the rest of the building and steal. They were nicknamed The Hole in the Wall Gang. He was outlawed by the casino society in December 1979. Jimmy Fratianno, a former mobster testified against Spilotro as a state witness. He indicted Spilotro with the murders of Foreman and another DeStefano hand man William Jackson.

In 1981, Spilotro was accused of killing Miraglia and McCarthy. The police paraded the testimony of Frank Cullotta, Spilotro’s friend. The presiding Judge Thomas Maloney dismissed the case for lack of sufficient evidence. Spilotro was a powerful mobster in Las Vegas.

In Chicago, the Outfit bosses became wary of Spilotro. The Outfit was making dwindling revenues from the businesses. The hierarchy met in a meeting in January 1986. After deliberations, the bosses agreed to eliminate Spilotro. Spilotro and his brother Michael vanished on the same day June 14, 1986. Their bodies were found buried in Enos, Indiana. The two decomposed bodies were identified through dental forensic identification by their doctor brother Pasquale Jr.

He was allegedly called to a mobster’s house. When he arrived with his brother Michael, the mob brutally beat them and buried them alive in deep graves. No one was arrested for the murders.

Spilotro married Nancy Stuart, a waitress in a local mob-owned bar in 1960. They never had a biological child. They adopted a son during their union. He had a marital affair with Geri McGee. Geri was Frank Rosenthal’s wife. Rosenthal severed his relationship with Spilotro due to the affair.