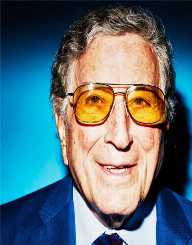 Anthony Benedetto was born on August 3, 1926, in Queens, New York, USA. He later went by the name Tony Bennett when he started working in the entertainment industry.

Tony Bennett dropped out of the High School of Industrial Arts as a teenager to support his family. In this span of time, he worked mostly odd jobs and short-term jobs, like being a copy boy.

Tony Bennett was drafted into the military in 1944, during World War II. He only stayed as long as he needed to and used his G.I. Bills to pay for his education.

Tony Bennett resumed his studies after World War II. He could finally go to school without feeling guilty about spending too much money since his G.I. Bill from fighting in World War II was now covering his tuition fees.  When he did enroll in school, he attended the New York School of Industrial Art.

Tony Bennett started his music career in the late 1940’s. Only then, he was going by the name Joe Bari. He was noticed by Pearl Bailey in 1949. Soon after he started to perform in clubs and o the stage. It didn’t take long for an even bigger star to notice him. Bob Hope loved Tony’s voice but didn’t love his stage name. He was the one who encouraged him to pick up the name Tony Bennett and even offered him to tour with him.

It could be said that Bennett’s actual professional music career began in 1950 when he signed a contract with Columbia Records. It didn’t take long after earning a record deal for Bennett to become a hit. One of his first big hits was the song Because of You, which was released in 1951. Some of his other famous early hits included Rags to Riches and Because of You. These songs had a pop tune to them, and teenagers and young adults loved it.

In the late 1950’s, Tony Bennett decided that he needed a change. He started to experiment with jazz music, but this was not nearly as good as his pop tunes. The jazz flops lost his popularity. He returned to creating pop music in the 1960’s, and his fame returned too. Some of the songs that got him back in the limelight were I Left My Heart in San Francisco and Once Upon a Time.

Even though the past had proved that pop was Bennett’s best bet for fame, Tony Bennett still wanted to try new styles of music. Columbia Records encouraged him not to do this, but instead of listening, he left the group and made his music label: Improv. While in his own company he was free to try out the new rock tunes that were sweeping over the radio.

Admitting defeat, Tony Bennett signed back on with Columbia Records in 1986. He went back to producing pop albums like The Art of Excellence. It was also around this time that he started to produced various tribute albums. He continued to record both remakes and original music well into the 2000’s when he was over 80 years old! In the 2000’s he also had duets with many famous musicians, like Gloria Estefan and Lady Gaga.

His most recent album, The Silver Lining: The Songs of Jerome Kern, came out in 2015 when he was 88 years old. Although he is now advanced in his years, he shows no signs of slowing down. He continues to make music to this day.

Throughout his music career, Tony Bennett has won dozens of awards. He has even won a total of 18 Grammys! Some of his Grammy-winning songs are  I Left My Heart in San Francisco, Steppin Out, Moonglow, and For Once in My Life. Some of his other awards are listed below.

Through his music career, Tony Bennett has never wavered on his love of art. He painted before and during his music career. He uses the name Anthony Benedetto when he signs his artwork. Many of his paintings are in famous museums around the country.

Tony Bennett is not only a singer and artist but also a writer. Throughout his lifetime, he has written four autobiographies, which are listed below in the order they were published.

Tony Bennett: What My Heart Has Seen
The Good Life: The Autobiography of Tony Bennett
Tony Bennett in the Studio: A Life of Art & Music
Life is a Gift: The Zen of Bennett

Tony Bennett was first married to Patricia Beech. The couple tied the knot in 1954, but their marriage did not last long before it ended in divorce in 1971 and he married again in the same year to Sandra Grant. This marriage too ended in divorce in 1984. His third and final marriage was to Susan Crow. This couple was married in 2007. Altogether, Tony Bennett has four children: Antonia, Dae, Danny, and Joanna.

Along with his wife, Susan Crow, he founded the nonprofit Exploring the Arts.