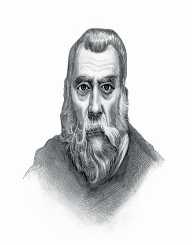 The artist Tintoretto was born Jacopo Comin in Venice around 1519. He was the eldest in a family of twenty-one children. His father Giovanni was a dyer, known as a tintore. As the eldest son Jacopo was given the nickname Tintoretto meaning dyer’s boy. The family roots were in Brescia, Lombardy at that time part of the Republic of Venice.

After his father noticed his son’s interest in dyes and painting, he took him to the studio of the artist Titan to be trained as an artist. This would have been in the early 1530s when Titan was middle-aged. Tintoretto spent ten days with Titan before returning home. After his time with Titian, Tintoretto was largely self-taught. He was inspired by Michelangelo’s designs and Titian’s use of color. Art historians believe that he may have studied with Bonifacio Veronese (b.1687-d.1553), Paris Bordone (b.1500-d.1571) or Andrea Schiavone (b.1522-d.1582). His work also showed the influence of the Old Masters including Giovanni Bellini (b.1430-d.1516).

His life centered around Venice and many of his paintings are held in the buildings and churches they were originally intended. Tintoretto worked during the Venice Renaissance and was an exponent of Mannerism. His work reflected the mystical side of religious experience and heralded the Baroque painting which centered around the dogmas of the Roman Catholic Counter-Reformation

Around 1546 Tintoretto painted three masterpieces at the church of Madonna dell’Orto: The Worship of the Golden Calf, The Presentation of the Virgin in the Temple and the Last Judgement.

Other works include St Mark Freeing the Slave (1548), Accademia, Venice. He also painted the Scuola di San Rocco (1564-1588) a set of religious paintings. After a fire at the Doge’s Palace Tintoretto was one of the artists who worked on the redecoration of the inside of the palace. He did four allegorical paintings in the Anticollegio (1578-77) as well as the huge Il Paradise (1588) and The Last Supper (1591-94), San Giorgio, Maggiore, Venice. Apart from his religious works, Tintoretto painted portraits and mythological paintings.

The Spanish Mannerist painter El Greco (b.1541-d.1614) showed the influence of Tintoretto in his work.