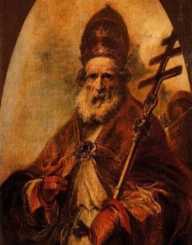 Leo entered the church, and by 431 was a well-known deacon.

He helped to settle disputes and keep things running smoothly. Emperor Valentinian III asked Leo to resolve a difference between a top-ranking military officer and a chief magistrate. Historians saw this as proof that Leo had the confidence of the church and state.

Pope Sixtus III died on 11th August 440. The people chose Leo to replace him, and on 29th September he was installed as Pope without opposition.

Leo ruled with strength. He changed the practice of Pelagians being able to take communion. He also discovered Manichaeans were gathering in Rome. As a result, he debated with them and burned their books.

He surrounded himself with many wise men, and he re-established papal authority within the church.

Leo had several disputes and his authority was challenged at times, but he always maintained control. Some bishops stepped out of line with how they performed some ceremonies like baptisms. Due to this, Leo ordered them to send delegations to Rome and learn how to officiate their rituals properly.

Written works by Leo have survived the years. There are nearly 100 sermons and approximately 150 letters.

Leo sent delegates to read his tome to Archbishop Flavian of Constantinople. The message reaffirmed the faith of the Roman Church. The Council ignored it along with the protests of Leo's delegates, and they also deposed Flavian.

Leo taught all the time about Jesus and his role, particularly his divinity and humanity.

He also saw himself as an heir of Peter. Leo promoted papal primacy as having been succeeded from St. Peter. He did this to keep the churches unified at a time of unrest.

The barbarians attacked more often, and the church increasingly stepped in to assist with mediation in civil and political matters.

In 452, Attila invaded Italy and demanded the hand of Emperor Valentinian III's sister, as well as a dowry.

The emperor sent a delegation of three, including Leo, to meet with Attila. Nobody knows what took place in the discussions, but Attila packed up and withdrew his forces.

Pope Leo, I was seen as one of the most important Popes in history.