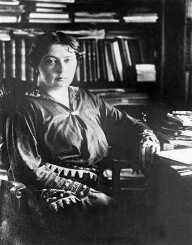 Sigrid Undset was born on the 20 May 1882 in Kalundborg, Denmark. Her father was Norwegian archaeologist Ingvald Martin Undset, and her mother was Charlotte Gyth. She was the first-born and had two younger sisters. When Undset was two years old, her parents returned to Norway.

Sigrid Undset was educated at a progressive co-educational, private school run by Ragna Nielsen. After her father died in 1893, Nielsen offered to keep Undset and her two sisters on at the school as non-fee paying students. Sigrid Undset did not do her entrance examination instead moving to a commercial school where she trained in commercial subjects.

For ten years after leaving school at the age of seventeen, Sigrid Undset worked as a secretary to support herself. At the same time, she had two books published: Mrs. Marta Oulie (1907) and Gunnar’s Daughter (1908). She resigned from her job after the Norwegian government gave her a travel scholarship. She used the scholarship to Italy and Germany. In Rome, Sigrid Undset became part of the Norwegian expatriate community, and it was during that time she met Anders Svarstad. She returned to Norway in 1910 and in 1911, her third novel Jenny was published. In 1912 she moved back to Rome and lived with Svarstad, who was at that time separated from his first wife. The couple lived in Belgium and London before returning to Norway and during that time had three children together.

Sigrid Undset was a prolific writer who published over thirty-six books. Her historical novels reflect her interest in Norwegian myths, legend, and history. She later works also included her preoccupation with religion after she had converted to Catholicism in 1924. She is best remembered for her trilogy Kristin Lavransdatter (1920-1922) and the historical novel The Master of Hestviken (1925-1927). These books in their English translations have remained in print for over seventy years.

Sigrid Undset was chair of the Norwegian Authors Union from 1935 until 1940 until she was forced to leave Norway during the Nazi occupation. During World War II she spent time in Sweden before moving to the United States, returning to Norway in 1945.

At forty-six she was one of the youngest people to have been awarded the Nobel Prize for Literature. Sigrid Undset won the prize 1928 mainly for her evocative and lyrical descriptions of Northern Life during the Middle Ages.

Undset’s portrait is used on Norway’s 500 kroner banknote as well as a two kroner postage stamp.

Sigrid Undset married the painter A.C. Svarstad in 1912, but the marriage was annulled after she became a Roman Catholic in 1924. The couple had three children.

After winning the Nobel Prize in 1928, she gave away the prize money to charity.