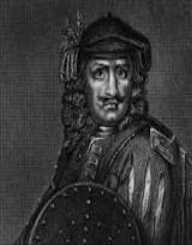 Robert Roy MacGregor was born around late February or early March 1671 in Loch Katrine in Scotland. Official records noted his baptism on March 7, 1671. His father Donald was one of the heads of the MacGregor Clan. He grew up in his native town in the rural Gaelic countryside. In July 1689, the MacGregor clan supported the Scottish uprising against the English rule.

The uprising later known as the Jacobite revolution was led by the Viscount of Dundee in support of the exiled English King James II against the nobles in London who had dethroned him. Roy and his father Donald fought with other members of the clan in support of the revolt. Donald was killed in battle.

The English authorities led a backlash against all the clans which supported the revolt. Roy became a target of the English for being the son of a senior leader of the MacGregor clan. He adopted his mother’s maiden name Campbell and started a cattle-selling business in Crieff. At the time, cattle rustling was part and parcel of the Scottish culture and very lucrative. Roy became a wealthy man. He established himself as part of Scottish nobility through the MacGregor family line.

In 1711, Robert Roy took a huge loan from Sir James Graham, who ruled as the first Duke of Montrose. He entrusted his headman to buy cattle and increase his selling stock. In the early cattle market of 1712, the headman sold the increased stock and disappeared with the proceeds of the sale. Unable to locate his headman, Roy failed to pay back his loan.

The Duke of Montrose went to court for restitution. Roy became bankrupt and lost all his land and property to Duke Graham. As a result, his family got evicted from their home. Roy lost his fortune, fame, and respect among the citizens of Montrose.

Embittered by his loss, Roy resolved to seek his revenge against the Duke of Montrose. He waged a systematic campaign of cattle rustling and other banditry acts against James Graham. As time went by, Roy extended his banditry to extortion of money.

Robert Roy collected money from landowners in return for protecting their property. Roy vandalized those who refused to pay up the protection money. In return, the Duke of Montrose made a truce with his longtime nemesis, the Duke of Argyll. The Duke of Argyll was a victim of the banditry attacks of the outlaw Roy in a few occasions. The two ganged up against one common enemy, Roy.

In 1715, the second Jacobite uprising erupted. As in the first one, Roy galvanized the MacGregor clan against the English crown. He created a small army in Aberdeenshire and marched with it to Stirling. In November 1715, Roy met with the royal army led by the Duke of Argyll. The Duke of Argyll defeated Roy and the Jacobite army in the Battle of Sheriffmuir. After the defeat, Robert Roy became a wanted renegade for treason by the English authorities.

He secretly set camp in Inveraray and continued to engage the Duke of Argyll in the third Jacobite revolt in 1719. This time the Jacobites enlisted the help of the Spanish army in their quest to defeat the English crown. The Duke of Argyll with his English royal army defeated the Jacobites in the Battle of Glen Shiel later in the year.

The last existing pocket of the Jacobite resistance was vanquished. Roy fled to continue waging a bloody war against the dukes of Montrose and Argyll until his surrender in 1722. He was put under house arrest awaiting his deportation to the Caribbean island of Barbados. He was eventually pardoned in 1727.

Rob Roy died in his home in Balquhidder Glen on December 28, 1734, at the age of 63. He was buried at the nearby cemetery in Kirkyard. His grave lies next to his wife and one of his sons.

Legendary stories about his heroics surfaced after his death. Stories of his capture thrice and subsequent mysterious escape spread like bush fire. Fireplace stories of his command in battles and banditry against the Dukes of Montrose and Argyll were distorted to make him a larger than life figure. His pardoning through public acclamation fueled the fire of the legendary stories. Robert Roy became the first fugitive to be pardoned by the British authorities through public acclaim.

Apart from traditional folktales, novels have been published about his life. One of the earliest novels titled Rob Roy was published in 1818. Several other publications have been released since then. Tourist attraction centers in Scotland have been named after him. In 2002, the Scottish authorized celebrated his life by commissioning a footpath that connects the places Roy stayed.

Whether or not Roy had such tremendous exploits in his life or not, the Scottish people have over the years kept his tradition alive. In trying to maintain their distinct heritage within the larger British kingdom, they have created a legend that competes with the English Robin Hood or King Arthur.