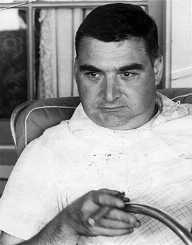 Pierre Emil George Salinger was born 14th June 1925, to Herbert and Jehanne Salinger. He was born in San Francisco, California, in the United States. His father was a mining engineer, his mother, a journalist. Salinger was extremely talented as a pianist, and when the family moved to Canada, he was enrolled at the Toronto Conservatory of Music with the aim of becoming a concert pianist. He had a private tutor who taught him his academic subjects at home for three hours a day, and then he would practice the piano for four to five hours every day.

Pierre Salinger’s first public performance was at the age of six. When he returned to San Francisco with his family, he continued to do his piano study. At the encouragement of his mother, he had a break from the piano. She felt he was becoming isolated from society. He was initially only going to have a 12-month break, but he never went back to the piano.

Salinger studied at Lowell High School in San Francisco, and then went on to study at San Francisco State University from 1941 to 1943.

In 1943, Pierre Salinger left university to enlist in the U.S. Navy. He served during World War II, reaching the rank of Lieutenant, before leaving to resume his university studies. After finishing at university, he started a career in journalism. He began as a reporter for the San Francisco Chronicle, and he was also a contributing Editor to Collier’s through the 1950s.

Salinger wrote a series of articles in 1956 on a labor union leader called James Hoffa. He was then hired by Robert F. Kennedy as legal counsel for the Senate Select Committee investigating organized crime. Kennedy then asked Salinger to become press secretary for his brother, John F. Kennedy, who was a member of the Senate. In 1960, Salinger was one of the leading contributors to Kennedy’s presidential campaign. When Kennedy became President in 1961, he was invited to become his press secretary.

Pierre Salinger went to conferences with Kennedy, and after being invited to the Soviet Union by Premier Nikita Khrushchev, Salinger arrived in May 1962. He spent time with the Premier before returning to the U.S. Later that year, he spoke to the press about what he had learned about the Soviet missiles. In 1963, he was flying to Japan with several other Cabinet members when President Kennedy was assassinated. Salinger then served in the Johnson administration.

When Salinger had finished serving in the Johnson administration, he decided he would run for the Senate himself. He was appointed as a Senator in August 1964, filling a seat that had become vacant from a Senator who had died. When he ran for a full six-year term, he was defeated. He resigned from the Senate in December 1964 and then moved into the private sector.

In 1968, Pierre Salinger was working on the presidential campaign for Robert Kennedy. He was only about 12 feet away when Kennedy was assassinated, and he was devastated. He moved to France and became a correspondent for L’Express. That same year he appeared in two episodes of Batman, taking the part of a lawyer who defended Catwoman at trial.

In 1990, Pierre Salinger went to the Middle East after Iraq invaded Kuwait to report for an ABC special. He left the ABC, and returned to the U.S., moving to Washington, where he joined a public relations company. In 2000, he returned to France once again. He tried to give testimony at the trial of the Lockerbie bombers in Scotland but was not allowed to, despite being adamant that he knew who the real bombers were.

Salinger announced that if Bush won the presidency, he would leave the U.S. permanently to spend the rest of his life in France, which he did. Between 1964 and 1998, Salinger released 17 books, including, With Kennedy (1966), America Held Hostage: The Secret Negotiations (1981), and John F. Kennedy, Commander in Chief: A Profile in Leadership (1997).

1981: Recipient of the George Polk Award

In 1947, Pierre Salinger married Renee Laboure, and the couple had three children. They divorced in 1957.

Salinger’s second marriage was in 1957 to Nancy Brook Joy, but they divorced in 1965.

In 1965, he married Nicole Helene Gillmann. They had a child together, but they divorced in 1988.

In 1989, Salinger married for the fourth time. His wife was Nicole Beuvillain de Menthon. They were still together at the time of his death in 2004.

Pierre Salinger died on 16th October 2004 in France. Cause of death was given as heart failure.