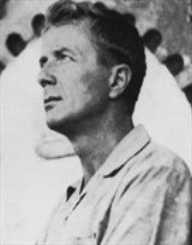 Paul Bowles was born in 1910 in New York as Paul Frederic Bowles. His parents were Rena and Claude Dietz Bowles. His father Claude was a dentist, and Paul was their only child. Paul’s relationship with his father was cold and polite, and they kept their distance.

There is a legend that his father tried to kill Paul when he was just a newborn, but there is no evidence for it. Paul Bowles believes it to be true; therefore their relationship is not too good. While growing up, Paul had a close relationship with his mother. She read stories by Edgar Allan Poe and Nathaniel Hawthorne to him, which influenced Paul’s interest in writing short stories himself later in life.

Paul Bowles learned to read when he was three years old, and very soon began to write stories himself. When he was eleven, he also got interested in poetry. His interest was not only reading it, but also composing it. His first published poem was in 1929 when Bowles was seventeen years old. It was “Spire Song,” and published in “Transition.” The writing was not the only interest of Bowles.

Another interest of his was music. The first performance that Paul Bowles heard at the age of fifteen in Carnegie Hall influenced his young mind a lot.  “The Firebird” by Stravinsky inspired Bowles to improvise with piano playing.

In 1928 Paul Bowles started studying at the University of Virginia. He studied only for a short while and left it in 1929. He went to Paris without informing his parents and initially did not intend to return.

After a couple of months of working in the Paris Herald Tribune, he returned to the United States and started working in a Dutton Bookshop in New York. At that time he began writing a fiction book “Without Stopping.”

Upon Bowles’s return to the United States, his parents forced him to resume studies. He did, but after a semester ran off to Paris once again. In Paris, Bowles started composing music. His first piece was finished by 1931, and was called “Sonata for Oboe and Clarinet.”

While in Paris, Paul Bowles became acquainted with Gertrud Stein. She advised him to visit Tangier, which he did together with his friend Aaron Copland in 1931. He liked the place and later decided to live there full time. After spending time in Morocco, Bowles went to Berlin, and after a  year he returned to Northern Africa.

After a couple of years, Paul Bowles returned to the United States in 1937. He returned to New York and stayed there for the following ten years. He got recognized as a composer and had worked not only with the stage production but also on instrumental pieces.

Paul Bowles married Jane Auer in 1938. Even though they were both homosexual, they kept a close personal relationship and stayed married. They were a well-recognized couple in New York in the literary circles.

Paul Bowles decided to concentrate on writing prose in 1945. One of his best-known works from that period was “A Distant Episode.” He admitted that the inspiration for his stories was his wife, Jane. They stayed in New York only until 1947, when Bowles received a job offer in Tangier.

They moved there permanently the same year. The desert inspired him, and he used to go alone into the Sahara to work on it. It was published in 1949, and called “The Sheltering Sky.” The book was a success. It very quickly became a best seller, and in just two months was printed three times.

A year later, in 1950 Bowles finished a short story collection. This book was called “A Little Stone,” and contained some of the most popular work of Paul Bowles. The “Pages From Cold Point” and “The Delicate Prey” were first published as part of this collection.

After the success of his first novel and short stories, Bowles published several other works. The book “Let It Come Down” came out in 1952, and “The Spider’s House” in 1956. Paul Bowles was concentrating on writing but meanwhile worked also on composing music. He composed music for several plays.

Jane fell ill in 1957 after she survived a stroke. Up until her death in 1973, Jane’s health declined and it very much preoccupied Bowles’s mind. At the time he focused more on music rather than writing, and as Morocco gained its independence, Paul Bowles composed and recorded traditional music of Morocco.

His knowledge of the local language opened another horizon for Bowles. He not only recorded Moroccan music but also translated works of Moroccan artists. Together with a colleague Daniel Halpern in 1970 Bowles founded a literary magazine “Antaeus.” This journal published new authors and already well-established writers. The first Antaeus saw daylight in 1994.

Jane passed away in 1973. After she died, Bowles stayed in Tangier. He was less active and from time to time organized some workshops and interest clubs. In 1982 he published another story collection “Points in Time.” He continued working on translations too. Once Paul Bowles even appeared on a screen. He participated in the filming of the movie “The Sheltering Sky” which was released in 1990.

Bowles returned to the United States, New York in particular, in 1995, but stayed there only shortly. After the visit, he returned home to Tangier.

Paul Bowles health was slowly declining due to respiratory problems, and he was less enthusiastic to give interviews or be socially active. In 1999 Paul Bowles died due to heart failure in Tangier. Out of his 88 years of life, Paul Bowles spent 52 years in Tangier.

Paul Bowles was a very talented man. He not only was a great music composer but also was fond of writing short stories, several novels, and poetry. He worked on multiple translations, wrote an autobiography and several travel descriptions. He has appeared in several movies, and at least nine interviews about him are released.