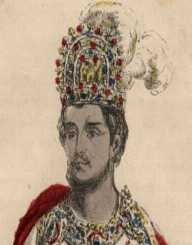 Montezuma II was born in 1466 in a place called Tenochtitlán. The city was the capital of the Aztec Empire. It was situated at the present day location of Mexico City. Moctezuma, Moteuczoma and Motecuhzoma are the various spellings and pronunciations of Montezuma. Montezuma II was the ninth and last emperor of the Aztec Empire. He received a thoroughly fair education in Art, Science and Religion during his early days. He was particularly committed to his religion. Montezuma even served the temple of the Aztec war god Huitzilopochtli as a cleric. His performance in different Aztec wars during the reign of his uncle Ahuitzotl was also creditable.


SUCCESSION TO THE THRONE

Montezuma II succeeded his uncle as Aztec Emperor in 1502. During his next 18 years rule, the Aztec Empire became the largest ever in size. The Aztec kingdom reached up to the present-day Honduras and Nicaragua while Montezuma was in power. However, he insistently demanded heavier tributes from the overpowered tribes. He also had a penchant for religious sacrificial victims each time he undertook a journey. Such whimsical demands led to resentment among the tribes under his rule.

During his reign, Montezuma arranged several large scale expeditions to expand the territory of his empire. His policy of demanding hefty contribution from the defeated tribes and obtaining sacrificial victims led to a rebellion among the tribes. The revolt resulted in a war between the Aztec Empire and a number of tribal groups.

INVASION OF THE SPANIARDS

The Aztec folklore says that a white, bearded god by the name of Quetzalcóatl will appear and will rule over them. In 1519, a Spanish contingent under the leadership of Hernán Cortés arrived to conquer the Aztec empire. He too was a white, bearded person. Cortés probably knew about this belief of the local people. He used this folklore to his advantage while leading his expedition in order to win the territory across Mexico. When Cortés advanced towards the Aztec capital, Montezuma at first tried to appease him by sending expensive gifts. However, Cortés could sense the underlying truth behind such a gesture shown by Montezuma. He won over the resenting, rebellious local tribes who had suffered due to Montezuma’s policy.

CONQUEST OF THE AZTEC CAPITAL

The local subject tribes welcomed Cortés, believing him to be an emissary of the god Quetzalcóatl. Montezuma was of also the same opinion about the Spaniard. Hence, instead of indulging in fighting against him, he welcomed him in the city. Cortés, on the other hand, suspected this invitation to be a trap. He realized that if he could keep Montezuma in his captivity, Aztec people would not dare him to attack. With such thought in his mind, the Spaniard seized Montezuma in a bloodless encounter. He used Montezuma as his puppet and governed the proceedings of the Aztec Empire from behind the curtain. Montezuma even ordered his chiefs to obey the Spaniard. He even arranged for valuables like gold etc. as a gift for the Spanish emperor.

As Cortés became the de-facto ruler of the Aztec empire, another Spanish contingent arrived at the Mexican shores to curb and control his power. Sensing trouble, Cortés reached Mexican shore and tried to convince his fellow countrymen to join him. In the meantime, the local tribes revolted against him because of the harsh and unfriendly policies of his administration.

When the Spaniard hurried back to the Aztec capital, he found his men under siege inside the palace. The threat of starvation was looming large on these Spaniards under siege. Cortés immediately instructed Montezuma to supply the essentials to his beleaguered compatriots. Montezuma refused to obey the order. In desperation, Cortés released one of the captured Aztec chiefs and ordered him to restore the supply of the essentials. However, after his release, the chief Cuitlahuac joined the rank of the rebellious group of the local tribes. He also assumed the leadership of the group.

KILLED BY HIS OWN PEOPLE

Amid fierce fighting in the capital, Cortés finally persuaded Montezuma to ask his people to heed to the words of the Spaniard. The irate local tribes however refused to listen to the words of a captive emperor. They welcomed Montezuma by pelting a flurry of stones thrown towards him. Montezuma found himself severely injured by the stone pelting. He succumbed to his injuries three days later. He breathed his last on June 29, 1520.