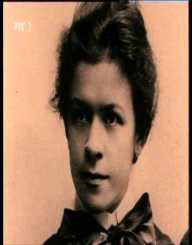 Mileva Maric was born 19th December 1875, to Milos and Marija Maric. She was born into a wealthy family, living in Titel, in the Austro-Hungarian Monarchy (modern-day Serbia). She had two younger siblings. Mileva Maric moved around quite a bit in her years of high school education. She began her high school education in 1886. She started attending a high school for girls in Novi Sad, but the following year moved to a different school in Sremska Mitrovica. In 1890 she began at yet another school, the Royal Serbian Grammar School in Sabac.

In 1891, her father sought special permission for Mileva Maric to enroll at the Royal Classical High School in Zagreb, which was an all-male school. She passed the entrance exam, and began classes in 1892. Special permission was sought again so that Maric could attend physics classes in 1894. Later that year, Mileva Maric became very ill, and moved to Switzerland. She continued her studies in Switzerland, at the Girls High School in Zurich. In 1896, she began to study medicine at the University of Zurich.

She only studied for one semester at the University of Zurich, before changing to the Zurich Polytechnic. At Zurich Polytechnic, she was studying a diploma course in teaching, specializing in physics and mathematics. One of her classmates was Albert Einstein, who would later become her husband, and a world renowned physicist. Mileva Maric moved to Heidelberg, in Germany, to attend a semester at the university there, to further study physics and mathematics. She returned to Zurich Polytechnic, and continued on with her education.

Mileva Maric failed to pass her final examinations in 1901. She became pregnant to Einstein, which disrupted her education. She sat her exams again, while pregnant, but failed yet again. She returned home to Novi Sad, until the birth of her daughter. It is not known what became of the child – some say she died a baby, others say she was given up for adoption.

There have been questions in the scientific community over the years, as to whether Mileva Maric contributed in any way to Einstein’s early work. The general consensus is that no significant scientific contributions were made and that Maric gave up her career goals and dreams when she married Einstein.

Mileva Maric married Einstein in 1903. They married in Switzerland, and Einstein found a position at the time in the Federal Office for Intellectual Property. They lived in Bern until 1909. Einstein accepted a teaching position at the University of Zurich, so they relocated for the 1910 school year, and then in 1911, they moved to Prague, where Einstein had taken yet another teaching position, this time at the Charles University. A year later, they returned to Zurich, where Einstein had accepted a professorship at the Zurich Polytechnic.

During that time, the couple had two boys. Max Planck and Walther Nernst asked Mileva Maric to move to Berlin in 1913, which he agreed to. Maric was extremely upset and didn’t want to go, but agreed to nonetheless. Her marriage with Einstein had not been a happy one since 1912. Einstein had begun corresponding with his cousin, Elsa. In 1914, Mileva Maric returned to Zurich with her two sons, and the separation became a permanent one.

Mileva Maric and Einstein divorced in 1919. He forwarded his prize money from his Nobel win, which enabled Mileva Maricto buy a property to live in, as well as two for investments for the boys.

Unfortunately, one of the sons was diagnosed with schizophrenia and was living in a psychiatric clinic. Mileva Maric could not keep up with the costs for his care and had to sell the two investment properties. Einstein made regular payments to enable Maric to live and care for their sick son. Mileva Maric went on to release a book, In Albert’s Shadow: The Life and Letters of Mileva Maric, Einstein’s First Wife.

Mileva Maric has had a memorial plaque put up in her honor, at her former residence in Zurich. She has also had a bust unveiled in Sremska Mitrovica where she attended high school and another one on campus at the University of Novi Sad. She has had a high school in Titel named after her also.

Mileva Maric would have had a difficult life living in Einstein’s shadow, and suffered herself from depression over the years. She was, though, a trailblazer for women wanting to be educated in higher subjects traditionally learned by men.