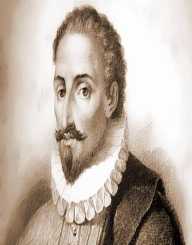 Miguel de Cervantes was a Spanish author best known for his novel about a man who believed he was a knight.

Miguel de Cervantes was born on September 29, 1547, in Alcala de Henares, Spain.  His father was a barber, but also the local surgeon.  His mother entered her marriage by being sold by her poor father who lost his fortune.

They had an unhappy marriage.  Miguel de Cervantes had six brothers and sisters.  They moved around a lot for their father's work and dealt with poverty.

His first poem was published in 1569 as a tribute to the wife of King Philip II, Elizabeth of Valois.  It was collected for a memorial.  Cervantes served in the Spanish Navy in 1570 at the post in Naples. Miguel de Cervantes also served in the army.  He took part in the Battle of Lepanto in 1571 so that he could do his part for his king as well as his God.  He suffered from fever and was wounded.

Miguel de Cervantes served again after his six-month convalescence in the hospital.  In 1575, his ship Sol was intercepted between Naples and Barcelona.  Miguel de Cervantes and the other passengers were enslaved in Algiers for five years.  His family paid the ransom, and he returned to them in 1580.

Miguel de Cervantes wanted readers to see a realistic outlook using clear language that was accessible to everyone.    Miguel de Cervantes did not get rich off of the book. However, it was the first best-selling book in the world.

Miguel de Cervantes continued writing and publishing his novels until his death.

Miguel de Cervantes did, however, have an affair which resulted in a daughter, Isabel de Saavedra.  She was a member of the convent near his home and where he wished to be buried.  Miguel de Cervantes married Catalina de Salazar y Palacios in 1584.  They did not have any children.

The writing of Miguel de Cervantes and his contribution to literature was the beginning of classic modern literature.  Cervantes's experience in the military, as well as his extensive travels, were often featured in his stories and poetry. His famous work Don Quixote has been considered one of the great books of the Western World by Encyclopedia Britannica.  Its modern style had an effect on Spanish language as well.

The language has been referred to as the language of Cervantes for his contribution.  Don Quixote has been retold through some mediums including the opera The Man of La Mancha and the art of fellow Spaniard Pablo Picasso. Miguel de Cervantes was called The Prince of Wits for his use of humor and satire that readers could relate to.