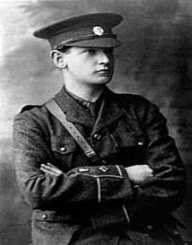 Michael Collins was an Irish politician and military leader.

Michael Collins was born on October 16, 1890, near the town of Clonakilty, County Cork, Ireland. His father, Michael John, owned a large farm called Woodfield. His mother was Mary Anne O’Brien. He had two older brothers and five older sisters. His father died when he was six, and his mother took over the farm. He spent two years studying at the Clonakilty National School.

He worked for The West Cork People, a newspaper owned by his brother-in-law. In 1906, he moved to London and started working as a clerk in the Post Office Savings Bank. He then worked as a messenger at Horne and Company, a stockbroker firm. At the same time, he took some law classes at King’s College London. He also did some work at J. P. Morgan and the Craig Gardiner accounting firm.

At the age of nineteen, Michael Collins joined the Irish Republican Brotherhood. He quickly rose the ranks and became a financial advisor in the organization. During the Easter Rising of 1916, he served in the movement’s headquarters at the General Post Office in Dublin.

He helped prepare the arms and drill the troops. A few days later, the group was arrested by the British and taken to the Frongoch internment camp in Wales. Collins was set free in December 1916.

After his release, Michael Collins became one of the key figures in the Irish independence movement. He became the secretary of the National Aid and Volunteers Dependents Fund and joined the Sinn Fein political party. In the 1918 general elections, he was elected as Member of Parliament. Instead of joining the House of Commons at Westminster, he helped create the new Assembly of Ireland in Dublin. The following year, he became the Minister of Finance. He took out a large bond issue to fund the new Irish Republic.

He led the government, directed guerrilla tactics, and organized arms-smuggling operations. He created The Squad, a special assassination unit designed to kill British agents and informers.

In 1921, Michael Collins made several trips to London as a delegate to the Anglo-Irish Treaty negotiations. In January 1922, he became the Chairman of the Provisional Government of Ireland. He worked with a team of solicitors to create the new Irish Constitution. When the Irish Civil War broke out in June 1922, he became the Commander-in-Chief of the Irish National Forces.

On August 22, 1922, Collins visited Cork County. Michael Collins was ambushed and fatally shot while driving near the village of Beal na Blath. He was 31 years old. The other soldiers in his group survived.

They took him to the Shanakiel Hospital in Cork, and then to St Vincent’s Hospital in Dublin. His body was laid in state at the City Hall for three days. More than half a million people attended his funeral at the Pro-Cathedral. After that, he was buried at the Glasnevin Cemetery. The circumstances surrounding his murder remained somewhat unclear.

Every year, a commemoration ceremony takes place at Michael Collins' grave and his murder site. His former house in Clonakilty was turned into a museum. In 2002, his grand-niece founded the Collins 22 society, an organization to preserve his legacy. In 2012, the Central Bank of Ireland released gold and silver coins featuring his portrait.

Collins’ character has been featured in many films and documentaries, such as Beloved Enemy, The Treaty, The Shadow of Beal na Blath, Infamous Assassinations, Rebellion, Resistance, and others. Irish bands Black 47, Wolfe Tones, and Cruachan wrote songs about Collins.