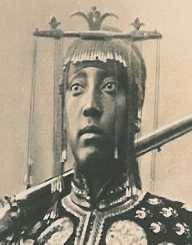 Emperor Menelik II was born in Angolalla in the Amhara Region in Ethiopia, on August 17, 1844. Menelik was named the successor for Negus Haile Melekot in 1855. After Melekot’s death, Menelik was imprisoned by Emperor Tewodros II. However, he was later transferred to Magdala mountains and was treated well by the emperor. He eventually married Tewodros’ daughter AltashTwodros. In 1865, Menelik’s family members plotted his escape from Magdala. He abandoned his wife and went to Shewa.

After returning to Shewa, Menelik II proclaimed himself Negus and reclaimed his crown. However, he did not want to take decisive actions towards Tewodros, since he had treated him well. After Tewodros committed suicide, Menelik threw a big celebration but was saddened by the loss. Menelik slowly built his power base and organized several events to win the favor of the locals. He also made economic and military engagements that turned out to be essential in expanding his Empire.

In 1878, Menelik II acquiesced to Emperor Yohannes, who recognized him as Negus of Shewa. When Yohannes was killed in the war in 1889, Menelik proclaimed himself as the emperor.

Menelik II is considered to be the founder of modern Ethiopia. He wanted Russia to be the country’s main ally, and after a visit in 1893, the two countries became strong allies. From 1893 to 1913, Russia sponsored visits of advisers and volunteers to Ethiopia. From the beginning of the 1880s, Menelik began reuniting the lands of the Empire. He mostly succeeded to create a centralized power. However, the region was highly damaged by the numerous wars.

During Menelik’s reign, the Great Famine of 1888 to 1892 took place. It was the worst famine in the history of the region and killed third of Ethiopia’s population. It was caused by a cattle disease, which killed most of the national livestock. The infection is believed to be introduced by the Italians. In 1889, Menelik made a treaty with Italy. Italy agreed to recognize several villages as the border and not to harass Ethiopian traders. However, the treaty’s version in Italian was altered and gave more power to Italy. Menelik found out about the changes and rejected the treaty. After unsuccessfully trying to bribe Menelik into submitting the country to Italy’s power, Italy started out a war.

After Menelik II rejected the treaty, the Battle of Adwa started out. Eritreans tried to push Italy out of the country and prevent invasion in Ethiopia. When the two armies met in Adwa, Ethiopians came out as winners. After the defeat of Italian army, Menelik had a chance to occupy Eritrea, however, he decided not to do so, realizing that it would mean another battle with Italy. Ethiopia and Eritrea signed the Treaty of Addis Ababa, and Italy was forced to recognize the independence of Ethiopia.

In the 1890s, Menelik II moved to suppress slave trade and destroyed several slave market towns. Menelik prohibited slavery, but it was not easy to change people’s mind on the practice. Menelik introduced several advances in the country with the support of Russian Red Cross. In 1894, he began the building of a railway from Djibouti port to the capital. However, his plans were stopped upon learning that France has claimed the control of the line in Ethiopia. In 1906, Italy, France and United Kingdom came to an agreement and gave the control of the line to a corporation, and Menelik retired his full sovereign rights.

Menelik II married AltashTewodros in 1864 but divorced her in 1865. They had no children together. In 1865, he married Befana Gatchew, but the couple divorced in 1882. His third wife was Taytu Betul, with whom he remained married until his death. Menelik and Taytu owned 70 000 slaves. Before his marriage to Taytu Betul. Menelik fathered several children with other women and recognized three of them.

Menelik II spoke the Ethiopian languages of Amharic, Oromigna, Afar, and Tigrigna, as well as French, English, and Italian. He studied economics and invested in various deals, including American railroads. In 1909, Menelik suffered a stroke and was not able to reign. After this, the office was taken by his wife. Menelik II died on December 12, 1913.