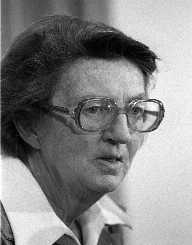 Mary Leakey was born on February 6, 1913, in London, England. She changed her last name to Leakey when she married.

Mary Leakey began her career in archeology when she was a teenager. Her first job was working as an illustrator for the book Adam’s Ancestors, in the early 1930’s. This book was written by the archaeologist  Louis Leakey, who Mary would later go on to work with and marry.

Around the same time that the Leakey’s married, the couple moved to Africa. One of the couple’s main work-related goals was to investigate the Olduvai Gorge, in Tanzania. The couple is working in this area mostly around the 1940’s. While there, they were looking for fossils that could show signs of human evolution. In 1948, Mary made her first big discovery. She found the skull of the Proconsul africanus, which was a type of ancient ape-like creature that roamed the earth almost 20 million years ago. This was the first ape-like fossil to be found that dated back that far (from the Miocene era).

The Leakey’s continued to live and work in Africa during the 1950’s. Mary Leakey continued to search for the ancestors of humans and primates in her research. In 1959, she found a partial skull of an ape-like creature called Australopithecus boisei, which was dated to be about 2 million years old.

The Leakey’s work continued throughout the 1960’s. Mary’s major discovery of this decade was shared with her husband. In 1960, the couple found a fossil of one of the most famous human ancestors, Homo habilis. This species of ape/human-like creatures lived about 1.5-2.5 million years ago. The couple also discovered that these creatures knew about to make and use stone tools.

In the late 1970’s through the 1980’s, Mary Leakey focused more on writing about archeology and paleontology, rather than working in the field.

Mary Leakey wrote books throughout her career as an archaeologist, but most of her books were written near the end of her career, in the late 1970’s - 1980’s. Her books are listed below.

Olduvai Gorge: Excavations in Beds I and II

All of Mary Leakey’s awards are due to her excellence in scientific and archaeological achievement. Some of her most impressive awards are listed below.

Mary Leakey married Louis Leakey in 1936. This couple had three children together: Jonathan, Philip, and Richard. The marriage ended in 1972, with Louis’s death. Richard Leakey also went on to become an archaeologist.