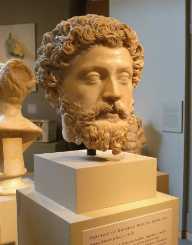 Marcus Aurelius was a world leader in the early years of written history.  He is also known as “The Philosopher King.”

Marcus Aurelius was born on April 26, 121 in Rome, Italy.  His family was well-to-do during that period.  His father Marcus Annius Verus was a Roman politician during his time. His mother Domitia Lucilla was a wealthy woman who inherited a tile and brick factory. Marcus Aurelius died before his son reached adulthood.  While his mother raised him, he was 17 when Marcus Aurelius was adopted by Titus Aurelius Antoninus.

Marcus Aurelius was an excellent student, and his parents paid for the best private tutors they could find.  One of Aurelius' teachers was the painting master Diognetus.  Marcus Aurelius was one of the major influences in his passion for philosophy.

Marcus Aurelius was a student in the philosophy of Stoicism.  It is a school of thought that virtue is based on knowledge.  Those who are wise will have a balanced life.

In the year 140, Marcus Aurelius became the leader of the Roman senate.  There were some tasks and jobs that he did during his time in power. Marcus Aurelius continued his education in philosophy and law.  Upon the death of Antoninus, he succeeded to the role as Emperor Marcus Aurelius Antoninus Augustus.

Marcus Aurelius reign as Roman Emperor was from 161 to 180 upon his death.  It was not the easiest of times during Roman history.  This is because both Aurelius and his adopted brother Lucius Aurelius Verus Augustus were co-rulers.  Some believe that it was Aurelius' idea to share the power with his brother.

There were other contributors to the hard times.  Not only were there plagues, but there were also wars for control of the land in their empire.  The brothers ruled in their way.  Marcus Aurelius was the official maintaining order from Rome while Verus focused on leading the generals and soldiers in battle. If the bloodshed did not kill the soldiers, they often brought back the illnesses and diseases that were foreign to their people.  Almost half of Rome died in the late 160s.

When the land claims were settled in the east, the empire was attacked by German tribes from the north.  When Verus died in 169, Marcus Aurelius took the lead role that his brother held. Marcus Aurelius clashed with one of the generals from his brother's army, Avidius Cassius.  When Cassius tried to take the title of emperor in Aurelius's absence, Cassius was killed by his soldiers.  To prove his leadership as emperor of the Roman Empire,

Marcus Aurelius had to travel through the empire to reclaim his rightful place.  In 177, Aurelius made his son Commodus his co-ruler.

Between 170 and 180, Marcus Aurelius wrote a work of philosophy called “Meditations.”

Marcus Aurelius married Faustina the Younger.  Together they had 13 children.  She traveled with him when he had to reestablish his position as Roman Emperor.

Marcus Aurelius died on March 17, 180 in Vindobona (present-day Vienna, Austria) at the age of 58.  His son Commodus was already co-ruler and next in line as Roman Emperor.  His reign was from 180 to 192. People still learn about Marcus Aurelius and his impact on the world.  There was a movie in 1964 called The Fall of the Roman Empire.  In 2000, the movie Gladiator was loosely based on his life.

His text “Meditations” was first published for the world in 1558, almost 1400 years after his death.  The only copy that remains of that first print is in the Vatican library.