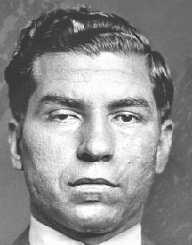 Charles Luciano was born as Salvatore Luciana on November 24, 1897, in Lercare Friddi, Sicily. His father Antonio worked at a sulfur mine in Sicily. He had three siblings. When Luciano was nine years old, the family immigrated to the United States and settled in New York. When he was 14 years old, Luciano dropped out of school and began working as a hat deliverer. At the time, he was earning $7 a week. When he suddenly won $ 244 in a dice game, Luciano quit his job and began making money on the street. His parents sent him to the Brooklyn Truant School.

When Luciano was a teenager, he started his gang and was a member of the Five Points Gang. He began earning money with protecting Jewish youth from Irish and Italian gangs for 10 cents a week. He also learned the pimping trade and met his future business partner Meyer Lansky. Between 1916 and 1936, he was arrested 25 times on charges of assault, blackmail, robbery, but was never imprisoned.


The beginning of crime life

Since January 17, 1920, when the Prohibition of selling, producing and transporting alcoholic beverages began, many criminals saw an opportunity to earn. That year, Luciano met several future Mafia leaders, like Vito Genovese and Frank Costello through the Five Points Gang. He was recruited by the boss of Manhattan gang, Joe Masseria. Luciano, Costello, and Genovese started their bootlegging operation, which was financed by Arnold Rothstein.

Rothstein was a mentor to Luciano and taught him skills that would allow him to move in high society. When in 1923, he was caught selling heroin to undercover agents, Luciano severely damaged his reputation in high society. To recover his reputation, he bought 200 seats to the Jack Dempsey- Luis Firpo boxing match and distributed them to the top gangsters and politicians of the time. His strategy worked, and Luciano returned to the high society on New York. By 1925, his income was measured around $12 million a year.

Charles Luciano soon became a top aide for Giuseppe Masseria’s organization and cultivated ties with younger mobsters. In 1929, Luciano was forced into a limousine, beaten and stabbed, leaving him to die on a Staten Island beach. Luciano survived, but he was left with a scar and a droopy eye.

In 1931, Luciano decided to eliminate Masseria and switched his allegiance to another mobster, Maranzano. Masseria was shot and killed, and Luciano took over his gang. After some time, Maranzano realized that Luciano is a threat to his operation, and hired a gangster to kill him. Upon hearing about this, Luciano decided to act first and sent his people to kill Maranzano.

Luciano set up the Commission as the governing body of the organized crime. This allowed him to maintain power over all the crime families and prevent gang wars. The Commission consisted of representatives from the Five Families of New York City, but two others were later added. During the early 1930s, Luciano began to take part in prostitution operations. This move made Luciano vulnerable to legal prosecution.

U.S. Attorney Thomas E. Dewey launched a raid against 200 brothels in Brooklyn and arrested ten men and 100 women. He set bail on each person of $10,000, which the arrestees could not pay. After some time, they began to implement Luciano to get out of jail time. In 1936, Luciano was arrested for 60 counts of prostitution. He was sentenced to 30 to 50 years in state prison.

Charles Luciano continued to run the crime family from prison, but in 1938, after the court refused to review his case, he stepped down, giving power to Costello. During World War II, the government struck a deal with Luciano, since his family controlled the waterfront. The US officials were concerned that German and Italian agents were entering the United States through there, and the Navy made a deal with Luciano. For providing intelligence to the Navy, Luciano’s sentence was commuted.

For his cooperation, Luciano was released from the prison, on condition that he will be deported to Italy. Luciano agreed to the terms but remained U.S. citizen. He sailed to Italy on February 10, 1946. The same year, he secretly moved to Havana, Cuba. He wanted to be closer to the United States and control over his crime family.

The major crime family heads went to Havana for a meeting to discuss business with Luciano. Soon after the meeting, U.S. officials learned that Charles Luciano is in Cuba and put pressure on the Cuban government to extradite him. Luciano was later deported back to Italy.

In Italy, Charles Luciano was under close police surveillance, but he continued his illegal activities. He was arrested on several occasions for suspicion of being involved in narcotics dealings. In 1957, the Genovese family began to move against Luciano and his New York boss Frank Costello.

Genovese collaborated with Vincent Gigante, who ambushed Costello and shot him in the head. However, Costello was only grazed in his head. Costello refused to cooperate with the police, but Gigante was arrested for attempted murder. After this, Costello was forced to retire and give the power to the Genovese family.

In 1929, Charles Luciano met the Broadway dancer Gay Orlova. The couple was together until Luciano went to prison, but they never married. In 1948, he met a Milanese ballerina Igea Lissoni. There is no information if the couple married, but they lived together. However, during their relationship, Luciano continued to have affairs with other women. She died in 1959 of breast cancer. Luciano never had any children.
Luciano died on January 26, 1962, of a heart attack.