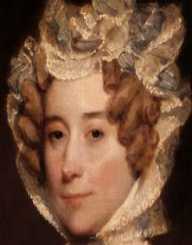 Louisa Adams was born on the 12th of February in the year 1775 in London, England. She was born to Joshua Johnson and Katherine Nuth Johnson. Her father was an American Businessman working in Maryland and mother, Katherine Nuth Johnson was an Englishwoman. Louisa was born into a big family with six sisters and a brother.

Though her childhood began in London, the family had to move to Nantes, France seeking refugee status due to the American Revolution during those times. It was in Nantes only that she received her early education thereby becoming fluent in French. Louisa Adam’s family moved back to London in the year 1783, and she along with other siblings was enrolled in a boarding school.

They could not study there for a more extended period as her father’s business suffered from losses and the kids had to be stripped from the formal education. But this did not hamper Louisa’s interest for education as all the kids were tutored at home by a governess and she, later on, developed a great interest in reading.

Louisa Adams first met with John Adams when some fellow Americans were invited to the house of Joshua Johnson (her father) situated in London in the year 1795. When she met John, he was 28 years old and was recently named America’s Minister to the Netherlands. This meeting did not end there, and it gradually developed over the next few months till the time they ultimately decided to marry each other. Neither of their parents approved for the marriage, both of them tied wedding knot on 26th of July in the year 1797.

Soon after the marriage, John’s father became the President of the U.S., but after his term ended, he could not be re-elected. It was this time only that Louisa met her in-laws for the first time. Louisa was not so close with her mother in law but was an absolute favorite to her father in law. Her life was not that easy even after marriage as she had to go through several miscarriages in but it was until late 1801 that she gave birth to a son who was followed by two more sons in the year 1802 and 1803 respectively.

In the year 1809, John Quincy accepted the appointment as American Minister to Russia where she was separated from her two elder sons. She even gave birth to a daughter in the year 1811, but the baby girl died after a year which increased the sense of loss.

Louisa Adams played a crucial role in fulfilling the endeavor of John to be a President. Some of the efforts included staging many lavish parties and even made many social calls.

Louisa as a First Lady did not set any new precedents, but she was always annoyed of the fact of being observed for some clues on the strategies of her husband upon some important matter. Though she was also the first woman to be part of the congressional debates she was never a part of the decision making process.