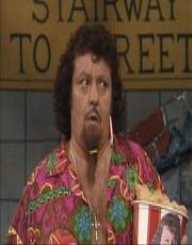 Lou Albano was an Italian-American actor and professional wrestler. Born on July 29, 1933, his wrestling career spanned for 16 years, from 1953 to 1969. After a successful career, he turned into a manager until 1992. Throughout his wrestling and managerial career, (making 42 years) he trained four singles competitors and 15 different tag teams to win championship gold. Lou Albano was among the group of three notorious managers in the World Wrestling Federation (WWF)known as the “Triumvirate of Terror” alongside Freddie Blassie and The Grand Wizard of Wrestling. He was one of the pioneers of the Rock ‘n’ Wrestling Connection in the 1980s. Albano later leveraged on his popularity to venture into acting in Hollywood. He was the actor and voice of Mario in The Super Mario Bros. Super Show!

Lou Albano was born on July 29, 1933, in Rome, Italy to Carmen Louis Albano and Eleanor Albano née Morrone and baptized in the Vatican. His parents are of Italian descent but both born in the United States. Carmen was in Italy with his wife for his medical studies at the University of Bari during Albano’s birth. Eleanor was a concert pianist and later a registered nurse while Carmen became a medical practitioner. Carmen later co-patented a forceps device use in assisting breech birth delivery. The family returned to the United States, settling in New York City.

Lou Albano received education at Archbishop Stepinac High School in White Plains, New York. He was very athletic and therefore took part in various track and field events and captained the school’s football team. He received full scholarship packages from several universities but settled on the University of Tennessee. He joined the university’s football team with teammates like Doug Atkins and Darris McCord. He was expelled from the University for cheating in his final exams. He later joined the United States Army but was discharged after eight months due to injuries sustained through football.

After being discharged from the military, Lou Albano decided to start a boxing career and through his distant cousin, Lou Duva, he met boxing promoter, Willie Gilzenberg. Goldenberg instead advised him to join wrestling. Gilzenberg would later become the first president of the WWWF. Albano received wrestling training from Soldier Barry upon the request of Gilzenberg. The two later started a house show in the New York area in 1952. He was at the time billed as Mount Vernon Mauler and gradually made a name for himself in the wrestling community.

He later joined Capitol Wrestling Corporation in Washington, DCworking under promoter Vince McMahon and his son. Albano did not achieve much as a solo wrestler. He, however, gained some success partnering Tony Altomare in a tag team. The team known as The Sicilians won the Midwest tag team championship on 30 June 1961. The team also won the WWWF (now the WWE) United States Tag Team Championship in July 1967 from Spiros Arion and Arnold Skaaland. They held the title for just two weeks.

Lou Albano was not an exceptional wrestler and being cognisant with the short span of wrestlers’ career; he decided to start a career as a manager. He changed his appearance by gaining weight, growing up his beard and hair. He later started tying his beard with a rubber band after seeing a homeless man do it, and this became his trademark. He was the manager of Ivan Koloff when he ended the seven-year reign of Bruno Leopoldo Sammartino in January 1971. Sammartino was very popular that his lost silent the whole arena. Out of anger, the crowd attacked Albano, Koloff, his wife, and a family friend. The securities were able to take them, out of the arena without Koloffbeing officially handed the belt.

However, the crowd still chase them out of the taxi they sought to refuge in breaking the windows. They later run to a nearby bar to seek refuge but was also attacked there until the police arrived. Though his career as a manager, he guided the likes of Greg Valentine and Don Muraco to the Intercontinental Heavyweight Championship. He also saw 15 tag teams including The Wild Samoans, The Blackjacks, The Valiant Brothers, and The Masked Executioners among several others to the WWF World Tag Championships.

Lou Albano also collaborated with pop singer Cyndi Lauper by first appearing in his music video for the song “Girls Just Want to Have Fun” and later agreed to work on a project. They staged a scene where Albano’s character claimed he is the reason for Lauper’s success and writes all her song, denigrating Lauper, and women in general. Lauper’s character in return assaults Albano with her purse, and both agreed to settle their scores in the ring. They decided to pick female wrestlers to contest on their behalf with Albano choosing The Fabulous Moolah while Lauper settled on Wendi Richter. The match dubbed The Brawl to End it All, took off on July 23, 1984, and shown live on MTV. Richter was able to defeat Moolah for the WWF Women’s Championship.

Soon after his career in wrestling, Lou Albano went into acting appearing in the film Wise Guys in 1986, starring Danny DeVito. He played the character of Mario in Nintendo’s live-action and animated sections of The Super Mario Bros. Super Show! Albano also appeared in television series including Hey Dude, 227, Miami Vice and a frequent guest on the game show Hollywood Squares. In 1992, he appeared in the film, Body Slam, 1987, starring Roddy Piper, and Dirt Benedict and also in Stay Tuned, in 1992.

Lou Albano married his high school lover, Geraldine Tango in 1953. They had three children, Carl Albano, Louis Jr, and Mary Ellen. On July 20, 2008, he released an autobiography titledOften Imitated, Never Duplicated. Albano suffered a heart attack in May 2005 but was able to recover. However, he suffered another heart attack on October 14, 2009, which ended his life at age 76.