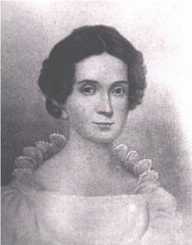 Letitia Christian was born on November 12, 1790, at the Cedar Grove plantation in New Kent County, Virginia. Her mother was Mary Brown Christian. Her father was Colonel Robert Christian, a plantation owner. She was the seventh of twelve siblings. She was educated at home, and she learned how to manage an estate.

In 1808, Letitia met a young law student named John Tyler. Their courtship lasted five years. They finally got married on March 29, 1813. They went on to have eight children, one of whom died during infancy. They had four daughters, named Mary, Letitia, Elizabeth, and Alice. They had three sons, named Robert, John, and Tazewell. Robert and John became lawyers, while Tazewell became a doctor.

Letitia Christian preferred to stay out of the public eye. She did not want to be involved in her husband’s political career. He spent most of his time in Washington, while she stayed in Virginia and looked after their estate. In 1839, she suffered a stroke which left her partially paralyzed.

John Tyler was elected Vice President in the 1840 Presidential Election. He stepped into office on March 4, 1841. Letitia thus became the Second Lady of the United States. Only a month later, President Harrison suddenly passed away. John Tyler became President, and Letitia became the First Lady of the United States. However, she could not perform her duties because of her health problems. The First Lady duties were taken over by her daughter Letitia and her daughter-in-law Priscilla Cooper Tyler. They hosted events and socialized with the public. She spent all of her time in her room on the upper floor of the White House. She made only one public appearance, for the wedding of her daughter Elizabeth.

John Tyler.suffered one more stroke and passed away on September 10, 1842. She was 51 years old. This was the first time a First Lady died during her stay in the White House. Her funeral took place in the East Room. Her body was buried at Cedar Grove, the plantation owned by her family. Her daughter and her daughter-in-law continued performing the First Lady duties. Her husband remarried in 1844.

In 2006, the Isle of Man Post Office featured Letitia on a commemorative postage stamp. In 2009, the United States Mint featured her on a small gold coin and a bronze medal.