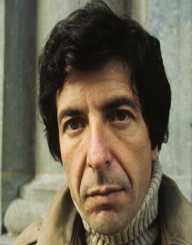 Leonard Norman Cohen was born on September 21, 1934, in Westmount, Quebec, Canada. His mother was of Lithuanian Jewish ancestry, and her father was a writer. His paternal grandfather was the founder of Canadian Jewish Congress. When Cohen was just nine years old, his father died.

Cohen went to the Roslyn Elementary School and Herzliah High School. In 1948 he began attending the Westmount High School and studied music and poetry. During his highs school years, Cohen was involved in various extracurricular activities, like photography, cheerleading and art and event campus clubs. He was also the president of the Student’s Council. Besides these activities, Cohen also learned to play the guitar and founded a country music group Buckskin Boys.

With Buckskin Boys, Cohen became frequent in various Montreal clubs. The group usually performed traditional songs and square dances. In 1951, Cohen enrolled at McGill University and began studying English. Federico Garcia Lorca and Jack Kerouac inspired him. This was also the time when Cohen actively began writing. His first work, Let Us Compare Mythologies was published in 1955, just after Cohen had graduated from the university. Although the collection of his works received good reviews, it did not sell well.

After graduation, Cohen enrolled and briefly attended Columbia University. He returned to Montreal and began working in several jobs, in his free time continuing to write poetry. However, his next book was published only in 1961, titled The Spice-Box of the Earth. The book was a critical and commercial success and established his career. The royalties from his book sales and a Canadian writing grant allowed him to buy property on Hydra island of Greece, where he spent the next seven years if his life. During this time, Cohen published his books Flowers for Hitler in 1964 and Parasites of Heaven in 1966. Besides poetry, Cohen also wrote the novels The Favorite Game and Beautiful Losers. Beautiful Losers became a major scandal due to the books overly sexual content.

Although Cohen’s writing earned him a living, he felt like it was not enough. Cohen began to explore music again. He decided to go to the United States and pursue a career in music. At the time, Cohen was already in his 30s and was often discouraged from pursuing a career in music due to his age. At the time, Cohen met folk singer Judy Collins and performed several of his songs. Collins recognized Cohen’s talent and encouraged his dreams. In 1967, Cohen made his debut at the Newport Folk Festival. He was then noticed by the A&R representative John Hammond, who added Cohen to his roster and signed him to Columbia Records.

After signing to Columbia Records, Cohen quickly began working on his debut album. At the end of 1967, he released the album Songs of Leonard Cohen. The most popular songs from the album were ‘Suzanne”, “So Long, Marianne” and “Hey, That’s No Way to Say Goodbye.” Despite the fact that the album did not become a mainstream success, Cohen developed a steady follower base. In 1968, Cohen released a new collection of poetry and his second album Songs from a Room. The album reached No. 63 on the Billboard Hot 100 chart. The following year, Cohen performed at the Isle of Wight Festival in England, together with major artists like Jimi Hendrix, the Doors, and Miles Davis.

In 1971, Cohen released his third studio album Songs of Love and Hate. He was also able to reach different audiences after his songs were featured in the soundtrack of the movie McCabe & Mrs. Miller. He then took a three-year hiatus from recording. However, during this time Cohen wrote and released a new poetry book, The Energy of Slaves. In 1974, Cohen released his come-back album New Skin for the Old Ceremony. He embarked on the New Skin tour to support the album. Cohen was not the commercial success his studio had hoped for but was adored by his fans.

To improve his sales, Cohen began working with the producer Phil Spector on the album Death of a Ladies’ Man. Spector was troubled and often erratic, and at one point had even held a gun to Cohen’s head. Cohen later described the album as grotesque and said it was the least favorite of his albums. In 1979, Cohen released a poetry and prose collection Death of a Lady’s Man, which was followed by Recent Songs. Cohen did not release any work until 1984 when he published the poetry collection Book of Mercy. The same year, he also released the album Various Position which focused more on spiritual themes, and the single “Hallelujah” became his best known and most often performed songs of all time.

In 1988, Cohen released the album I’m Your Man, which became a major hit in Canada and Europe. The most notable songs from the album were “Everybody Knows” and “First We Take Manhattan.” In 1992, Cohen was introduced to younger audiences, after releasing his album The Future, from which songs were featured in the film Natural Born Killers. The same year he also released the tribute album I’m Your Fan. The album included songs from artists like Nick Cave, The Pixies and R.E.M. In 1995, he released the album Tower of Songs and then retreated to the Mount Baldy Zen Center where he studied under a Zen master for the next five years of his life.

In 1999, Cohen returned to the music industry with various performances and in 2001 released his first album in nearly a decade, Ten New Songs. The same year, he also released the live recording Field Commander Cohen from his 1979 tour. Cohen then released two new albums, Dear Heather and tribute album Leonard Cohen: I’m Your Man.

A major shock for Cohen came in 2006 when he discovered that he had been scammed out of millions of dollars by his manager Kelley Lynch. Cohen filed a lawsuit and won a &7.9 million settlement, but was never able to recoup the money. The same year, Cohen published poetry collection Book of Longing. In 2009, after being introduced to the Rock and Roll Hall of Fame, Cohen embarked on a world tour to rebuild his finances. His tour was chronicled in albums Live in London and Songs from the Road. During this time, Cohen also received the Grammy Lifetime Achievement Award.

In 2012, Cohen released an album Old Ideas, which was a major success. The album peaked at No.3 in the United States and reached the top of album charts in Canada and several European countries. Cohen released two more albums, Popular Problems in 2014 and You Want It Darker in 2015. Cohen died on November 7, 2016. It was revealed that Cohen had fallen in the evening before his death and died in his sleep.