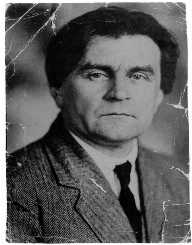 Kazimir Malevich was born on February 23, 1879. He was a Russian painter. He is popularly known for his Geometric abstract art, and he was also the generator of the avant-grade Suprematist movement. He was attracted to art at a very young age, and he taught himself painting by watching other people paint. He also introduced modern painting into his arts as he explored different textures and materials. He died on May 15, 1935.

Kazimir Malevich was born on February 23, 1879, in Kiev Governorate of the Russian Empire. He was born to Polish parents, Ludwika and Seweryn Malewicz. He was brought up along thirteen siblings, but five of his siblings did not make it through childhood. His father used to go on extended trips because he was a manager of a sugar factory and he would take his family with him. In 1895, he joined a local school in Kiev to study drawing. In 1896, he moved to Kursk and continued painting.  In 1904, his father died, and with the inheritance that was left to him, he moved to Moscow. He then enrolled at the Moscow School of Painting, Sculpture, and Architecture.

In 1910, after graduating college, Kazimir Malevich went through tutelage under painter Fedor Rerberg who considerably developed his artistic skills. He was so much into the painting that he made sure that he learnt everything possible from his tutor. In 1911, his painting was shown at a prestigious exhibition in St. Petersburg. In 1912, he came up with and developed his ‘Cubo-Futuristic’ style of painting.

In 1914, Kazimir Malevich created and designed the stage set of the Opera ‘Victory Over the Sun’, the Opera made Malevich very popular and a celebrity among the general public. In the same year, he exhibited his paintings at the ‘Salom des Independents’ in Paris, France where they were well received. The following year, he developed the foundations of Suprematism in his book ‘From Cubism to Suprematism.’

In 1916, he produced his masterpiece ‘Black Square’ which was purchased at an auction in 1933 for $250,000. The painting was again sold at an auction in 2002 at $1 million. In the same year, his paintings were exhibited as part of the ‘Jack of Diamonds Artists’ Group.’ During this period  Kazimir Malevich also painted ‘Suprematist Composition’ which was sold in New York for $60 Million.

In 1918, Kazimir Malevich exhibited his ‘White On White’ painting which was followed by him being hired as a set decorator for the play ‘Mystery Bouffe.’ He also became a member of the ‘Collegium on the Arts of Narkompros,’ ‘The Commission for the Protection of Monuments’ and ‘The Museums Commission.’ He began teaching at the Vitebsk Practical Art School in Belarus in 1919, and he continued teaching until 1922.

From 1922 to 1927, Kazimir Malevich also taught at the Leningrad Academy of Arts. He also published the book ‘The World as Non-Objectivity.’ From 1927 to 1930, he taught at the Kiev State Art Institute and the House of Arts in Leningrad. In Leningrad, his paintings were considered unacceptable and were removed from public display.

Kazimir Malevich was never married; he was so committed to his painting that he did not consider family. He was diagnosed with lung cancer which took a toll on his health. He succumbed to the disease on May 15, 1935. His painting ‘Black Square’ was hanged on the wall above his deathbed. In 2013, a non-profit charity ‘The Rectangular Circle of Friends of Kazimir Malevich to honor Malevich. He is most notable for the painting ‘White On White’ and ‘Black Square’.