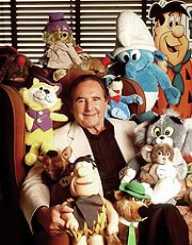 Joseph Barbera was an American Television producer, illustrator, and animator. He is the creator of the animated series Tom and Jerry along with William Hanna. The two also created The Jetsons and The Flintstones. They ended up establishing an animation studio which turned out to be one of the best 2oth century studios.

Joseph Barbera was an active participant in co-curricular activities during his high school years. In fact, he attained many boxing titles. However, he his interest in the sport gradually faded. Before his success, Joseph he sought for cartoonist job at The NY Hits Magazine. Sadly, he was not given a chance. As a result, he resorted to working in a bank to earn a living. Eventually, he had an opportunity to be a cartoonist with Saturday Evening Post, Redbook and Collier's

Joseph Barbera was born March 24th, 1911. His place of birth was in New York City in the United States. However, he grew up in Flatbush, Brooklyn. He was the son of Vincent Barbera and Francesca Calvacca who were both immigrants.

The family moved to Flatbush, Brooklyn when Joseph Barbera was only four months old. His two younger brothers were namely: Larry and Ted. Sadly, their father abandoned them when Joseph was 15 years old. Jim his mother’s brother took then became their fatherly figure.

Joseph Barbera attended Erasmus Hall High School situated in Brooklyn and graduated in 1928. During his first grade, he developed a great passion for drawing and displayed a great talent on the same. During this time he also participated actively in boxing tournaments and won many awards and titles. In high school, he also met Dorothy Earl who became his girlfriend and later his first wife. In fact, they were referred to as "Romeo and Juliet" for their great affection towards each other.

Joseph Barbera began working when in high school to support himself. He started off as a tailor’s delivery boy. Later he tried for a cartoonist position in The NY Hits Magazine but did not succeed. Luckily he was employed in a bank where he earned a living for a while.

During this time, he took classes at Art Students League of New York. Subsequently, he was employed at Fleischer Studios to work at its ink and paint department. Later in 1932, he became a storyboard artist and animator at Van Beuren Studios. During this time, he worked on cartoon series including Rainbow Parades and Cubby Bear among others.

In 1939, Joseph Barbera and William Hanna formed a partnership that would last for more than 60 years. The following year, the two directed Puss Gets the Boot. This was among those nominated for Academy Award for Best (Cartoon) Short Subject. Their most successful cartoon creation was the famous Tom and Jerry. They created more great hits after that.

In 1935, Joseph Barbera wedded Dorothy Earl, his high school sweetheart. The couple was blessed with four children. Later in 1963, they divorced. Subsequently, he tied the knot with Sheila Holden.

Joseph Barbera took his last breath on December 18th, 2006 in Los Angeles, California, in the U.S. He was 95 years old at the time. His body was laid to rest in Forest Lawn Memorial Park located in Glendale