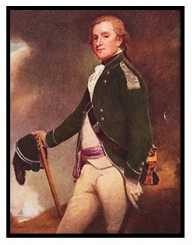 John Burgoyne was a British army general, politician, and dramatist. Born on February 24, 1722, he was a member of the House of Commons from 1761 to 1792 representing Midhurst and Preston.

He as an army officer, he fought in the Seven Years’ War by participating in several battles including the Portugal Campaign in 1762. Burgoyne is known for his role in the American Revolutionary War, when he surrendered his army of 6,200 men on 17 October 1777 after being surrounded by American forces.

John Burgoyne came under intense criticisms when he returned to London, and ended his military operations. Burgoyne was also a playwright and became known for his works like The Maid of the Oaks, and the Heiress.

John Burgoyne was born on February 24, 1722, in Sutton, Bedfordshire to Anna Maria Burgoyne and Captain John Burgoyne. He received education at Westminster School and was very athletic during his school days.

He had sold his previous commission of captaincy in 1751 to raise money to cater for his wife and himself. He attained the rank of captain and lieutenant colonel in the Coldstream Guards.

John Burgoyne took part in several raids against the French coast including the Raid of Cherbourg in 1758. He was instrumental in the introduction of light cavalry in the British Army during this period. Burgoyne served as a brigadier general during the Portuguese campaign and led the light cavalry in the Battle of Valencia de Alcantara for the capture of Valencia de Alcantara and Vila Velha de Rodao.

John Burgoyne represented Midhurst in parliament in 1761. After serving in Midhurst, he was elected to the House of Commons for Preston in 1761. After attaining this position, he reduced his military activities to concentrate on parliamentary duties for some years.

He was very outspoken and made several contributions in the House including calling for an investigation into the activities of the East India Company on alleged corruption in 1772.

American War of independence (The Surrender of Saratoga)

John Burgoyne attained the rank of major-general before the American war. During the war, he was appointed a commander. Arriving in Boston in May 1775, he took part in the Siege of Boston but returned to England later. The following year he led the British reinforcement to Saint Lawrence River to relieve the besieged Quebec City, which was under the attack of the Continental Army.

The overconfident John Burgoyne and his army met a larger American army at Saratoga in September and October 1777. They were unable to break through the lines of the forces and Burgoyne was forced to surrender his entire army of 5,800 on October 17, 1777.

This became a turning point for the colonist in the war. Burgoyne was heavily criticised for the defeat back in England and was denied his regiment and governorship of Fort William in Scotland.

Work as a Playwright

John Burgoyne was also a playwright aside from his military duties. His works include The Maid of the Oaks, 1784 and the Heiress in 1786. He collaborated with Richard Brinsley Sheridan in the production of The Camp in 1778. In 1780, he wrote the libretto of William Jackson’s The Lord of the Manor. Burgoyne wrote the translated version of Michel-Jean Sediane’s Richard Coeur de lion for a semi-opera production at the Drury Lane Theatre in 1788.

John Burgoyne married Charlotte Stanley, the daughter of Britain politician, Lord Derby. Derby did not give his consent to the marriage; hence, the two had to escape and married in April 1751. With this, Derby cut Charlotte off all her benefits leaving her nothing. Burgoyne had to sell off his commission in the army for £2,600 to carter to earn a living.

They had one child, daughter Charlotte Elizabeth. After conceiving their child, Lord Strange interceded on their behalf for Derby to accept their marriage, which he finally did in 1755.

After the death of Charlotte, John Burgoyne had four children with his mistress Susan Caulfield. John Burgoyne died on August 4, 1792, at his home in Mayfair. His death was unexpected as he was seen as strong and healthy the night before.