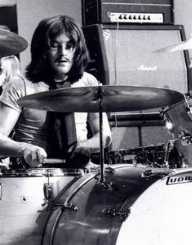 John Bonham was an exceptional English artist, a rock drummer and a songwriter who was renowned for his excellent skills in drumming. He was nicknamed ‘Bonzo’ or ‘The Beast'. He has been widely known as ‘Led Zeppelin’ band best drummer and is considered a great inspiration to many upcoming artists. He is recognised by ‘Modern Drummer’ magazine as ‘the best drummer of all time’.

John Bonham was born and raised by his English parents Jack and Joan Bonham. He was born on May 31, 1948, in Redditch, England, UK.He went to ‘Lodge Farm Secondary Modern' School. His passion in drumming became evident at five years where he used to make drummer sets out of coffee tins and other containers.

He managed to get his first drum at the age of ten and his first full kit when he was fifteen years old. While in school, his principal once acknowledged his great deeds and noted on his report card that he would be a dustman or even a millionaire.

After school, he started performing with various bands. These bands include ‘Terry Web’ and ‘Spiders’. Later he got a chance to join the well-known band called ‘Led Zeppelin’ which was initially known as ‘New Yard band’. This band was the beginning of his popularity in the entertainment industry.

In 1962 and 1963, John Bonham played for the ‘Blue Star Trio’, ‘Gerry Levene’ and also the ‘Avengers’ which enabled him to perfect his skills as a drummer. He worked with the ‘Led Zeppelin' band which he joined in 1968 and strived to ensure the group became successful. For sure, his efforts yielded good performances, and his band produced several successful albums. On October 22, 1969, the band released the second album in the Grammy Awards. This album became best-selling in his time.

On October 5, 1970, the band produced their third album which got positive acclaim. In the following year, the band created an outstanding album featuring ‘Lulu Kennedy Cairn’s’ song “Everybody Clap”. While still being the band’s drummer they released additional albums; ‘Houses of Holly’, ‘Physical Graffiti’ and ‘Presence’.

John Bonham had a good heart and could not turn down his friends who requested him to play drums in their work. For instance, he played in a friend’s album ‘Roy Woods’ and also performed for the English Rock band.
Bonham got a rare opportunity while in the ‘Led Zeppelin’, to work with Jimmy Page, a famous guitarist. He also co-wrote a song entitled ‘Kashmir’ that was featured on the sixth album produced by the ‘Led Zeppelin band’.

John Bonham married Patricia Bonham and had two children, Jason Bonham and Zoe. They worked together and supported each other in raising their two children despite any financial odds.

Before his death, he is said to have taken forty shots of Vodka and became excessively drunk. He died of asphyxiation at only 32 years. His death was a big blow to ‘Led Zeppelin’ band which was deprived of a drummer. Thus, with the gap of a drummer, the band’s activities halted.

Despite his skills in music, he suffered from stage fright and would at times panic before the band went to the stage.