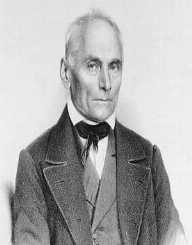 Jan Evangelista Purkyne was a Czech scientist, poet and academic philosopher who made major discoveries in the world of human and botanical anatomy.

Jan Evangelista Purkyne also was known as Johannes Purkinje was born on December 18, 1787. His birthplace is Libochovice, in the north of what is today the Czech Republic. His parents were Josef and Rosalia Purkinje. He was the eldest child in the family. His siblings were Emmanuel and Josef Jindrich. Purkinje lost his father at the age of six.

With the family under financial hardship, Purkinje went to a local elementary school for his primary education. As a Catholic, he studied classical Latin at the local parish in addition to Greek and astronomy. He became fond of music, playing the violin. In 1798 he joined a local parish school as a needy student. He sang in the Catholic-run school choir thus had a partial scholarship. He excelled in his studies and graduated from high school in 1804.

He applied to be a brother in the Piarist order, a Catholic brotherhood that ran the schools in Moravia. Having been a past student and choir member at a Piarist ran school; Purkinje was readily accepted into the order. As the custom dictates, Purkinje took his adoptive Latin name Clericus Silverius. He spent two years in a monastery in Moravia studying various subjects. He impressed his teachers for finishing his studies in two rather than three years.

In 1805 he started teaching at a Piarist school in Moravia. He studied philosophy from 1806 and 1807 while still teaching at the Moravia school. In 1807 he applied for admission at the University of Prague. He financed his studies by teaching children of the local nobilities in the city. After finishing his philosophy degree, Purkinje applied to study in the medical school.

In November 1812, Purkinje joined the university to study medicine with a financial grant. At the school of medicine, Purkinje studied natural and medical sciences. He furthered his studies in botanical and human anatomy, physiology and ophthalmology. He apprenticed at the clinic of Dr. Fritz from 1816 to 1818. Purkinje learned the precise art of autopsies in view of making a diagnosis and other specimens for the laboratory.

In 1819 he became a research assistant at the University of Prague’s Department of Anatomy. After failing to obtain professor accreditation, he decided to travel abroad. In 1821 he journeyed to Dresden, Germany. He presented his dissertation paper to the intellectuals in Leipzig. In January 1823, Purkinje obtained his professor accreditation from King Friedrich IV of Prussia, today's Poland.

Purkinje discovered several dynamics in human and botanical anatomy. He came up with the Purkinje effect. He diagnosed that red colors became darker to the human eye as natural light decreases. In 1837 he discovered the Purkinje Cells in the brain. These are large nerve cells found in the cerebellum.  In 1839 he also studied the Purkinje Fibers. These are tissues within the heart that serve as pacemakers of the cardiac blood pumping thrust. Purkinje studied the effect of plasma and protoplasm in human anatomy. In 1833, he noted that the skin had sweat glands. In 1823, he discovered that fingerprints were unique features that can identify individuals. In 1836, he noticed and documented the role of the pancreas in digesting proteins ingested in the body. He continued to work on other related studies in the field of human toxicology.

As a professor at the University of Breslau and later Charles University, he established the Schools of Physiology in both universities. He particularly emphasized for more Czech speaking students to study science at the Charles University. Since most of the institutions of higher learning offered their classes in German, Greek, and Latin, he pressed for the Czech nationals to study the classical languages to make an impact in the field of sciences.

Johannes Purkinje died on July 28, 1869, at the age of 81. He died in Prague, the capital of the Austria-Hungarian kingdom. Prague is the Czech Republic's capital city.

Purkinje made vital discoveries in the field of biological sciences. He named most of his discoveries after himself. He provided the basis of many scientific references for the modern researchers in the study of nerves, brain and body cells, and toxicology.

Purkinje has been immortalized in various places. The Purkinje Crater on the moon surface bears his name. An asteroid has his name. Several universities and institutions of higher learning in his native Czech Republic are named after him.