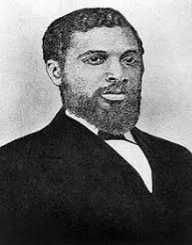 James T. Rapier was an Alabama African politician. He served as one of the only three black congressmen in the US. His major achievement included passing the Civil Rights Act in 1875.

James Thomas Rapier was born in Florence, Alabama on 13 November 1837. His father John H. Rapier, a renowned barber and her mother were some of the few established people of color.

He had three other older siblings. During the civil war, his parents did not go through slavery. At the age of four, Rapier lost his mother. The boys later relocated to Nashville, Tennessee to live with Sally Thomas, their grandmother for the better part of their early life.

James T. Rapier learned how to read and write in a nearby school for the black children. At the age of 19, he traveled to Canada with his Uncle where they settled in an all-black community in Buxton, Ontario.

His uncle had property in Canada which made it easy for Rapier to jell into the community.  In Canada, James T. Rapier attended Buxton Mission School a highly respected school.

After graduating from Buxton Mission School, James T. Rapier went on to pursue higher education. First, he earned a degree in teaching in 1856 in a school in Toronto.

After that, he went to the University of Glasgow in Scotland before returning to Canada. He later got admission to the bar after completing a law degree in Montreal College.

After teaching for a short time in his former school, Buxton Mission School enrolled in Franklin College to obtain a teaching certificate.

James T. Rapier worked as a reporter at the Northern Newspaper before buying a 200-acre piece of land at Tennessee where he planted cotton. Apart from doing farming, Rapier advocated for black voting rights. He, however, returned to his hometown to help his father.

At Alabama, he bought another 500-acre piece of land where he cultivated cotton. His active involvement in the politics saw him elected as a Republican delegate in 1867.

James T. Rapier ran for Alabama Secretary of State in 1870. He, however, lost the seat. Two years later he won the position of the Congressman becoming the third black Congressman from Alabama to win the seat.

Despite holding a major political seat, he recalled being denied services in various institutions because of his skin color.

In 1874 Rapier lost the Congressman seat. The Republican administration, however, appointed him as Alabama Internal Revenue Service where he served until his death.

James T. Rapier died on 31st May 1883 in Montgomery, Alabama. The cause of his death was pulmonary tuberculosis. His body was laid to rest at Calvary Cemetery.