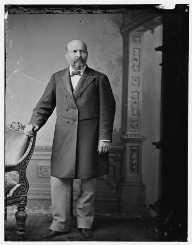 Also Known For : US President

During his short tenure of office, James A. Garfield strengthened the American naval power, reinstating the presidential authority against senatorial courtesy in executive appointments and dealing with corruption in the Post Office. On July 2, 1881, James A. Garfield was shot by Charles J. Guiteau, an aggrieved lawyer, and writer, at the Baltimore and Potomac Railroad Station in Washington DC. Even though the wound was not fatal at the time, it got infected by what was said to be the unclean and unprotected hands by his doctors. He died on September 19, 1981. Guiteau was convicted of murder and executed in June 1882.

James A. Garfield was born on November 19, 1831, to Abram and Elizabeth Garfield in a log cabin in Orange Township currently Moreland Hills, Ohio. James A. Garfield was the youngest child of five by his parents. Abram died in 1933, so Eliza took charge of the upbringing of the children even though very poor. In 1942, she married Warren Belden but this second marriage did not last as they divorced 1850. James A. Garfield suffered abuse and was teased by his fellow boys because he was fatherless and poor. With this, he took solace in reading. He left home at age 16 and found a job on a canal boat. James A. Garfield fell sick after six weeks of work and had to return home. It was at this time that he was convinced his mother and local education official to seek education.

James A. Garfield contested and won New Ohio 19th district seat on the ticket of the Republican Party for the 38th Congress. He defeated his main contender D.B Woods. James A. Garfield assumed his seat in December 1863 during which he strongly supported the abolishing of slavery and confiscations of the lands of the rebels. He served nine terms in the House spanning from 1863 to 1881.

In 1880, the Republican Party elected James A. Garfield as an uncompromised candidate for that year’s presidential election. James A. Garfield did not actually fill for nomination as the main contenders were former President Grant, Blaine, and Sherman. None of the candidates were able to achieve the majority vote 379 as  Grant had 304 votes and Blaine in second with 284; Sherman's 93. During subsequently balloting the Jeremiah McLain Rusk, of the Wisconsin delegation and Benjamin Harrison an Indiana delegate sifted some of the anti-Grant votes to James A. Garfield, a dark horse candidate. James A. Garfield had 50 votes on the 35th ballot through that. Even though he protested he did not want to contest, it was overruled, and at the end, James A. Garfield was able to gain 399 votes to become the Republican nominee picking Stalwart as his vice.

James A. Garfield contested against the Democrats nominee Winfred Scot Hancock of Pennsylvania. Garfield won 214 of the Electoral College against 155 of Hancock making him the 20th president of the United States of America.  As president, James A. Garfield introduced several reforms in education, foreign policy and dealt with the corruption of the Post Office Department during his short stay in office.

On July 2, 1881, Charles J. Guiteau, an aggrieved office-seeker shot James A. Garfield at the Baltimore and Potomac Railroad Station in Washington, D.C. He was shot two times one in the arm and the other piercing his back, breaking the rib and landed in the abdomen. James A. Garfield shouted, "My God, what is this?"  Guiteau also said"I did it. I will go to jail for it. I am a Stalwart and Arthur will be President."

However, did not die on the spot and was taken to an office and later to the White House. Doctors who came to assess the bullets wounds all did with unsterilized instruments and uncleaned hands. This led to the infection of the wounds leading to his death on September 18, 1881, in Elberon, New Jersey. James A. Garfield became the fourth US president to be assassinated. Guiteau was charged with the murder of Garfield on October 14, 1881. On January 5, 1882, a jury found him guilty and sentenced to death by hanging. He was executed on June 30, 1882.

James A. Garfield was married to Lucretia Rudolph in 1858. The couple had seven children, but five survived infancy.