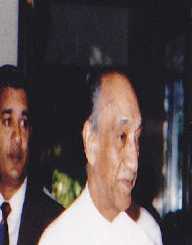 J.R. Jayewardene was one of the most popular political leaders of Sri Lanka. He served as the 2nd President of the country and was a lawyer turned politician. The most remarkable achievement of Jayewardene was the rapid economic progress Sri Lanka achieved under his governance.

J.R. Jayewardene made conscious efforts to improve the private sector and the tourism industry of the country which brought a lot of revenue. Before becoming the President, he also served as the Prime Minister of Sri Lanka for a short period.

J.R. Jayewardene was born on September 17, 1906, in Colombo. Jayewardene’s full name was Junius Richard Jayewardene. His star sign was Virgo. His family was economically very well off as his father Eugene Wilfred Jayewardene was the Chief Justice of Sri Lanka. His mother’s name was Agnes Helen Don Philip Wijewardena.  He was the eldest of their 11 children.

J.R. Jayewardene was enrolled into the Bishop’s College, Colombo for his primary education. He then attended the Royal College Colombo. He was a bright student who also took an active part in sports and other co-curricular activities. Like his father, he planned to grow up to become a lawyer and then a judge. To fulfill this desire, he enrolled into the University College, Colombo in 1926 and then attended the Colombo law school.

After graduating, J.R. Jayewardene started practicing law. He opened a private firm and took mainly civil cases. However, soon J.R. Jayewardene became inclined towards Politics and joined the Ceylon National Congress (CNC). He rose through the ranks of the activist group and became the joint secretary in less than five years.

In 1948, Sri Lanka became independent. Jayawardene, then a member of the United National Party (UNP) became the finance minister of the country. After five years, his portfolio changed to the agriculture and food ministry where he worked for another three years.

In 1951 he became the head of the Board of Control for Cricket in Ceylon. His political influence also kept growing to new heights in the period. In 1965, he became the Minister of State for the UNP government and devoted his focus and energy to improve the tourism industry of Sri Lanka. In 1970, UNP lost power and Jayawardene was named the leader of the opposition. When the UNP Chief Dudley Senanayake died, Jayawardene was unanimously elected as the new UNP leader.

In 1977, he became the Prime Minister of Sri Lanka. He also took measures to amend the constitution to make the President a real executive. In 1978, he became the 2nd President of the country – one with real power, not just a titular head. One of the chief measures he took as President, was to boost the private sector and tourism in Sri Lanka. He also took steps to bring an end to the long-running conflict between the Sinhalese and Tamil people. However, he did not have much success. He retired in 1989.

J.R. Jayewardene led a simple and private own life. His wife was Elina Bandara Rupasinghewhom he married in 1935. They produced one son - Ravindra ‘Ravi’ Vimal Jayewardene.