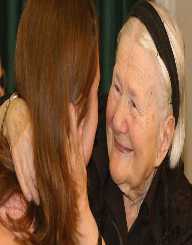 Irena Sendler, born Irena Kryzanowska, saved over 2,500 Jewish children and babies from the Warsaw ghetto. She worked with the Council to Aid Jews and smuggled children out of the ghetto. She gave them new names and found them homes. Sendler’s goal was to reunite the children with their parents one day. So, she wrote down their actual names inside of a jar in code.

She buried the jar under a tree to protect them from the Nazis. Irena was caught and tortured by the Gestapo, but she refused to give information about her colleagues. Sendler miraculously escaped and went on to live for 98 years.

Irena Sendler was born on February 15, 1910, in Otwock, Poland into a Catholic family. She was the only child of her parents, Stanislaw and Janina Kryzanowska. Sendler’s father was a well-known physician and one of the first Polish socialists. Sendler was greatly influenced by her father’s selfless service to the Jewish community according to thefamouspeople.com (TFP, 2017). Her father died after getting Typhus while treating Jewish patients that were denied by other doctors in February 1917.

Irena Sendler went on to study at the University of Warsaw. However, she was suspended for three years due to her activism. Sendler joined the Polish Socialist Party and protested the ghetto-bench system several times before the war. In 1931, she married Mieczys?aw Sendler. They moved to Warsaw during the 1930s before the German invasion.

Irena Sendler started working for the municipal Social Welfare departments inside of Warsaw. She later became the Senior Administrator inside of the social welfare department. They operated canteens throughout Warsaw, and they provided needs and necessities to orphans, elderly, and those in poverty. Soon after, the Germans invaded Poland in 1939.

In 1940, the Germans forced over 400,000 Jews that lived inside of Warsaw into a ghetto where thousands died of disease and starvation every month according to biography.com (Biography, 2016).

Irena Sendler felt sympathy for the Jewish people and what they were going through. She decided to register them under fake Christian names. She also lied, documenting that many of them had very infectious diseases so that they could avoid inspections. Sendler could have been put to death for what she was doing.

In 1943, Irena Sendler was selected by the Council to Aid Jews, otherwise known as the Zegota, to run their children’s section. She went by the alias Jolanta to protect her identity and family.

Since Irena Sendler worked for the social welfare department, she had a special pass to enter in and out of the Warsaw ghetto. The Jewish people lived in terrible conditions plagued by a lack of resources, disease, and the absence of warm clothing.

Irena Sendler and her team of around two dozen people started smuggling Jewish children out of the ghetto to get them to a safer place. The babies and children were hidden inside of bags that were filled with goods. Sometimes, they smuggled children out by placing them inside of a coffin.

The Jewish children were provided with false identities and placed in orphanages, convents, and non-Jewish homes. Sendler documented the children’s actual names in coded forms. She buried them under a tree inside of a jar to protect them.

The team was able to save over 2,500 Jewish children and babies. Many have estimated that Sendler saved around 400 personally according to biography.com (Biography, 2017). Sadly, her activities were discovered by the Gestapo. She was arrested on October 20, 1943. Sendler was sent to a place known as Pawiak Prison. This led to Sendler being severely tortured. She refused to give any vital information to the Nazis even with the brutal conditions. She was sentenced to death for her actions.

Miraculously, Irena Sendler was able to escape death due to help from the Zegota. They bribed the guards, and she was released in February of 1944. She took on a new alias and identity. She started working as a nurse until the Germans no longer occupied Warsaw. Irena Sendler continued to help the Zegota in many ways so that they could save even more Jews. Sadly, most of the parents of the children rescued later perished inside of death camps and ghettos, such as Auschwitz. Sendler’s work went very unnoticed until a group wrote a play on her role in rescuing people during the Holocaust.

Irena Sendler’s first marriage ended in divorce. She went on to marry Stefan Zgrzembski in 1947. Irena Sendler had three children with Zgrzembski, one daughter, and two sons. Andrzej, one of her sons, died during infancy. However, Janka and Adam did not. After Zgrzembski’s death, Sendler remarried her first husband. However, they sadly ended up divorcing again after a short period.

Irena Sendler passed away in Warsaw, Poland on May 12, 2008. She lived 98 years. Sendler left a legacy of rescuing thousands of children from the Nazis. She saved lives due to her bravery and willingness to risk her life for others.

In 1965, Irena Sendler was named Righteous Among the Nations by Yad Vashem for her work of saving thousands of children during the Holocaust. In 1996, Sendler was awarded the Commander’s Cross of the Order of Polinia Restituta. She received the more prestigious of this award, The Commander’s Cross with Star in 2001.  In 2003, her native country of Poland honored Sendler with the Order of the White Eagle, their highest award for a civilian.

She was also nominated for the 2008 Nobel Peace Prize. There has been a movie made about Sendler’s life titled The Courageous Heart of Irena Sendler. Posthumously, Irena Sendler was awarded the Audrey Hepburn Humanitarian Award in 2009. She also received the Humanitarian of the Year Award from The Sister Rose Thering Endowment.

There is not enough that one can say about Irena Sendler. Her work with the Zegota helped save over 2,500 children. Estimates say that Sendler personally rescued 400 children and babies. Sendler gave them fake names and placed them in homes, so they could be protected from the Nazis. Sendler’s team of two dozen people not only saved thousands of children, but it also gave hope that their children would survive to parents who later perished during the Holocaust.

Irena Sendler went on to win several Humanitarian awards. Many people learned about her works through the play and novel, Life in a Jar: The Irena Sendler Project by Jack Mayer. This play brought awareness to all of the great work Sendler’s team did during the Holocaust. She was nominated for the Nobel Peace Prize in 2008 and awarded the Order of the White Eagle, the highest award for a civilian inside of Poland.

Irena Sendler’s bravery and willingness to keep fighting, even though she was tortured, has inspired people to speak out for human rights. Her story shows what someone can do if they are willing to fight for what they believe in. Sendler was also a strong activist for socialism in Poland before the war. Her work with the Warsaw Social Welfare Department allowed her to help people in poverty. This also led to her ability to save as many people as she did during the Holocaust. Sendler lived a life that most people should strive for. A life of bravery and standing up for one’s convictions.