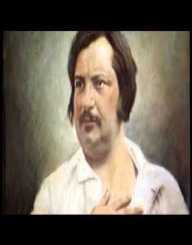 French writer Honoré de Balzac was born on the 20 May 1799 to Bernard-François Balssa, a civil servant and Anne-Charlotte-Laure Salembier who came from a wealthy French family. Balzac was one of four children born to the couple, and he was raised in Tours, France.

Balzac’s primary school took place at the Lequay Institution until he was eight years old. Between 1807 and 1813 he was a student at the College de Vendome. In 1814 the family relocated to Paris, and Balzac did two more years of study before becoming articled as a law clerk for three years. He also attended lectures at the Sorbonne (1816-1819).

Between 1819 and 1821 Honoré de Balzac, supported by his family, devoted himself to writing and produced an opera as well as various plays. He began writing short stories and wrote gothic novels under multiple pseudonyms. He also found work in printing and publishing. In 1829, Les Chouans, his first novel under his name was published, and the same year, La Physiologie du Mariage came out.

Eugénie Grandet was published 1833 to critical acclaim. He followed this up in 1834 with La Recherche de l’Absolu and Pere Goriot. César Birotteau was published in 1837.

By this time Balzac was starting to formulate the structure for La Comedie Humaine (The Human Comedy) which was published in 1841. He also wrote various plays and founded the Revue Parisienne. In 1848 he released Le Cousin Pons and La Cousine Bette.

The Human Comedy (La Comedie Humaine) consists of ninety-five novels set in France between 1789 and 1849 and depicts French live in minute detail during that period.

Honoré de Balzac was a prolific writer. He is regarded as one of the first writers to formulate the traditional form of the novel. His writing left a lasting influence on literature and influenced many including Gustave Flaubert, Jack Kerouac, Charles Dickens and Emile Zola.

Balzac’s life was marked by a constant balancing act concerning finances, and he was often in debt.

In 1832 he started a correspondence with Madame Ewelina Ha?ska, a married Polish baroness. He married the widowed Countess Ha?ska in St Barbara’s Catholic Church in Berdychiv, Russia on the 14 March 1850. The couple had corresponded for fifteen years.

1841 Madame Ha?ska finally became a widow; the marriage was postponed until her daughter was married.