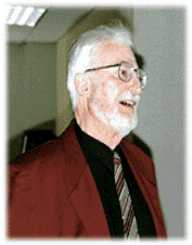 Heinrich Rohrer was born on June 6, 1933, in Buchs, Switzerland. His father, Hans Heinrich Rohrer was a distributor of manufactured goods. His mother’s name was Katharina Rohrer. Born half an hour after his twin sister, Heinrich was one among the family’s three children. His life was very playful and carefree during the childhood days with full of schooling activities, play and farming work occupying all the time. In 1949, his family relocated to Zurich, a large, busy and prominent city of Switzerland. The move ultimately changed Heinrich’s lifestyle.

Heinrich Rohrer enrolled at the Swiss Federal Institute of Technology in Zurich in 1951. Though he was interested in Physics, Chemistry and Classical Languages, his centre of attention was Physics. There were learned professors like the 1945 Nobel Laureate in Physics Wolfgang Pauli, Paul Scherrer, and G. Busch, etc. in the teaching faculty of the Institute. Heinrich learnt fundamentals of Physics from this galaxy of teaching professionals and earned his Bachelor of Science Degree in 1955.

Heinrich Rohrer started his Ph.D. thesis on superconductors immediately after completing his graduation. His Ph.D. thesis was dealing with measuring the length changes of superconductors at the magnetic field induced superconducting transition. His Ph.D. guide was Professor P. Grassmann, who is famous for his work on cryogenic engineering. The required measurements were supersensitive to vibration and Heinrich had to do all his research work post-midnight after the city fell asleep. Subsequently, he received his Ph.D. in 1960.

His military service with the Swiss Mountain Infantry interrupted his educational vacation for a while. In 1961, Heinrich Rohrer went to the United States for a honeymoon trip. During this trip, he got an opportunity to do research on thermal conductivity of type II superconductors and metals at Rutgers University in New Brunswick, New Jersey, USA. In the next two years, he completed his Postdoctoral research under the guidance of Professor Bernie Serin.

In 1963, Heinrich Rohrer returned to Switzerland. Professor Ambros Speiser, Director of IBM Research Laboratory in Rüschlikon, Switzerland invited him to work as a research assistant in the facility. In December 1963, Heinrich joined the IBM with some motivation and encouragement from Professor Bruno Lüthi. He continued to work with the computing giant till his retirement in 1997. During his long stint with IBM, he was associated with several research projects like Kondo Systems, multicritical phenomena, phase transitions, scanning tunneling microscopy and lately nanomechanics.

In 1974, Heinrich Rohrer went away from his company for a year-long sabbatical to study Nuclear Magnetic Resonance at the University of California, Santa Barbara. He worked in collaboration with Professors Alan King and Vince Jaccarino. Gerd Binnig, a fellow scientist, who shared the Nobel Prize with Heinrich, joined IBM Research Laboratory in 1978. Heinrich and Gerd began exploring oxide layers on metal surfaces. In the process of furthering their research, they tried to develop a spectroscopic probe. However, they designed and developed a new type of microscope.

This microscope was able to study atomic structure of a surface being examined in the greatest detail possible. The technique used to develop the microscope was called ‘Tunneling.’ The scientist duo found that the method of causing such tunneling through an insulating layer is useful in revealing minutest details about the atomic structures on either side of the insulation. The basic device was successfully tested in 1981 after protecting the probe needle from disturbances of vibration and noise by using some innovative methods.

In 1986, Heinrich Rohrer was appointed an IBM fellow. From 1986 to 1988 he served as the Manager of the Physical Sciences Department at the Zurich Research Laboratory. He accepted research appointments at Consejo Superior de Investigaciones Científicas in Madrid, Spain, and at Riken and Tohoku University in Japan following his retirement from IBM in 1997.

Heinrich Rohrer started research work on Nanotechnology in recent years. Till date, Nanoscience and Nanotechnology are relatively unexplored segments of physical science. It involves particles that are smaller than atoms. A nanometer is one-billionth of a meter. At this level, generally accepted principles of physics are no longer acceptable and forces such as friction, gravity and inertia act differently or rather are not even meaningful. Projecting his scanning tunneling microscope as a significant tool in unveiling the secrets of the nanoworld, Heinrich did substantial pioneering research work that could modify and manufacture items at the nano level.

In 1984, Heinrich Rohrer was co-awarded the EPS Europhysics Prize and the King Faisal Prize along with fellow researcher Gerd Binnig.

In 1986, he shared half of the Nobel Prize in Physics with his counterpart Gerd Binning for designing the scanning tunneling microscope. The other half was awarded to Ernst Ruska.

Heinrich Rohrer married Rose Marie Egger in the summer of 1961. According to his admission, his wife brought a very supportive and stabilizing influence in his life. The couple was blessed with two daughters, Doris Rohrer Hansen and Ellen Rohrer.

He was very fond of outdoor outings. In 1963, he was on a four-month camping trip in the United States. When he was on a sabbatical at Santa Barbara, he went to two extended camping trips with his full family and showed them the country from coast to coast.

Heinrich Rohrer breathed his last on May 16, 2013, at his residence in Wollerau, Switzerland. He was 79-years-old at the time of his death and died of natural causes.