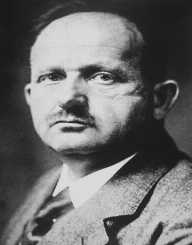 Hans Fischer was born on July 27, 1881, in Höchst, a district of Frankfurt, Germany. His father Dr. Eugen Fischer was the director of Kalle& Co firm in Wiesbaden and a privatdozent at the Technical High School in Stuttgart. Fischer attended primary school in Stuttgart and later went to the Humanistisches Gymnasium in Wiesbaden. After graduating from the gymnasium in 1899, he went to study chemistry and medicine at the University of Lausanne, graduating in 1904. In 1908, he got his M.D. qualification.

Hans Fischer started out his career working at a medical clinic in Munich. He then went on to work at the First Berlin Chemical Institute. In 1911, he returned to Munich and began working as a lecturer in internal medicine. In 1913, he began giving lectures in physiology at the Physiological Institute in Munich.

His scientific work mostly focused on investigating the pigments in blood and bile, as well as the chlorophyll in leaves. He also worked on the chemistry of pyrrole. His biggest contribution was the synthesis of bilirubin and hemin.

Throughout his career, Hans Fischer received many awards and honors. His biggest award was the 1930 Nobel Prize in Chemistry. He was also a fellow of the Academy of Sciences Leopoldina and an Honorary Doctorate from Harvard University. In 1929, he received the Liebig Memorial Medal, and in 1937, he was awarded the Davy Medal of the Royal Society of London.

In 1935, Hans Fischer married to Wiltrud Haufe. After the destruction of his institute and work in Munich in the last days of World War II, Fischer was completely devastated. He committed suicide on March 31, 1945.