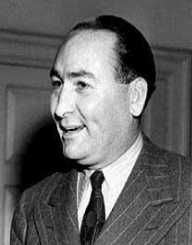 Harold Brent Wallis was born on October 19, 1898. He was an American film producer. He is known for producing films such as ‘Casablanca,’ ‘The Adventures of Robin Hood’ and ‘True Grit’ among others. He died on October 5, 1986, at the age of eighty seven.

Harold Brent Wallis was born on October 19, 1898, in Chicago, Illinois in the United States of America. He was born to Eva Blum and Jacob Wolowicz. In 1922, his family moved to Los Angeles in California, Harold later got employed at Warner Bros in their publicity Department. In 1923, he became part of the production department at Warner Bros. Later on in life he went ahead to become the Head of Production at the company. He has a career that spanned fifty years with him producing more than four hundred movies.

Some of the movies he produced at his early career include ‘The Adventures of Robin Hood,’ ‘Sergeant York,’ ‘Now, Voyager’ and ‘Dark Victory’ among others. He later left Warner after the film ‘Casablanca’ that he had produced someone else receiving the credits instead of him. He later became an independent producer. His works became successful both commercially and critically. He was even able to hire screenwriters such as Ayn Rand and Lillian Hellman.

In 1969, Harold B. Wallis produced ‘True Grit’ which starred John Wayne. The film won John the Academy Award for Best Actor. Harold later signed a contract with Universal Pictures. At Universal, he produced films such as ‘Anne of the Thousand Days’ and ‘Mary, Queen of Scots.’

His autobiography ‘Starmaker’ was published in 1980. He wrote the autobiography alongside Charles Higham. In the 1930s, he invested substantially in the real estate development of Sherman Oaks in California in the United States of America.

In 1927, Harold B. Wallis married actress Louise Fazenda until she died in 1962. In 1966, he married actress Martha Hyer until his death. He had a son, Fazenda Brent Wallis. He died on October 5, 1986, of diabetes in Rancho Mirage in California. He died at the age of eighty seven.